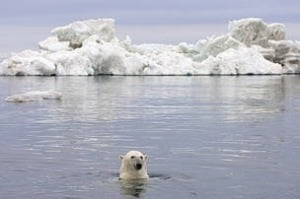 Moscow, Russia: Ministers and other national representatives made commitments today at the International Forum on Polar Bear Conservation that will help polar bears persist across their Arctic range. The commitments were made at a forum in Russia supported by WWF.
“The Arctic States’ response goes some way toward guaranteeing a future for these magnificent animals,” says Jim Leape, WWF International Director General.

“The states have built on forty years of good conservation planning. I urge them to redouble their efforts to ensure we meet the challenges of the next forty years – by implementing the circumpolar action plan for the bears and taking action on climate change.”

Another key commitment made in the Forum Declaration is that the five states responsible for polar bear populations – Canada, Norway, Denmark and Greenland, Russia and the United States – will work on managing the polar bears’ home in ways that will take into account the Arctic’s shrinking ice, and increasing industrial interest.

“We welcome all the commitments made today,” says WWF polar bear lead, Geoff York. “But we will also be watching to see that they are backed by action. WWF will track the activities of the states in an annual report card. We will also continue to support critical polar bear work across the Arctic, contributing our resources and expertise to assessing the health of populations, identifying and managing key habitats, and reducing conflict between bears and people.”

While the Forum commitments will help with managing polar bear habitat and with direct threats to the bears, these can only go so far. At the current rate of warming, climate change will ultimately erode the sea ice habitat on which the bears rely.

Addressing this longer-term threat will require investment from the range states and beyond in renewable energy.

For more information on the forum, including full text of the declaration:
http://www.polarbearforum2013.ru/eng 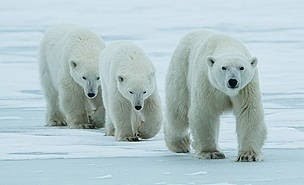