On January 27th, 2014, The Solar Foundation released its highly anticipated National Solar Jobs Census 2013, which found that the U.S. solar industry employed 142,698 Americans as of November 2013. This figure includes the addition of 23,682 solar workers over the previous year, representing 19.9 percent growth in employment since September 2012. During the period covered by the Census, solar employment grew 10 times faster than the national average employment rate of 1.9 percent. This growth rate is also significant in that it shows – for the first time ever – the solar industry exceeded the growth projections made in the previous year’s report. 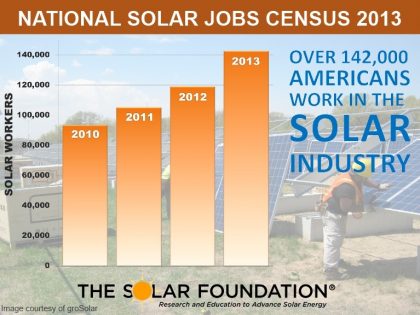