In a joint effort to unlock opportunities on scaling renewable energy projects.  For that’s all across the Caribbean-basin. In addition the Carbon War Room and Rocky Mountain Institute. For they brokered commitments. That’s from the British Virgin Islands, Colombia, Dominica, Saint Kitts & Nevis. Then to Saint Lucia, and Turks & Caicos. 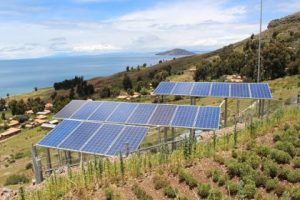 So all joined the Carbon War Room’s ‘Ten Island Renewable Challenge’. For it’s a campaign to help flip islands off fossil fuels. That’s as well as move forward with renewable projects for schools and hospitals.

The commitments were complemented by news that Virgin Limited Edition and Sir Richard Branson had committed Necker to the ‘Ten Island Renewable Challenge’ as a ‘demo’ island. For he awarded the contract to transition. All on to renewables to U.S. energy giant NRG.

Currently, a renewable Caribbean isn’t an option. For their lack of access to low-cost power is because it’s mostly diesel. For that’s because of the small size of their national market. Moreover an absence of standardized contracts. Finally and lack of a regional regulatory system.

In some cases, local energy suppliers, locked in for many years. For they currently enjoy a virtual monopoly. I mean over the system.

Moreover the creditworthiness is also a challenge. I mean for so many nations. Consequently, banks have been reticent to lend money. I mean for renewable energy projects in the Caribbean.

Representatives of 12 countries spoke up. For that’s as well as CEOs and executives. All from over 30 corporations and institutions. For that’s including Philips, Johnson Controls, Sungevity, Vestas, NRG, CARICOM, the Overseas Private Investment Corporation (OPIC) and The World Bank. All attended the summit, held on the British Virgin Islands.

Three large, cross-island initiatives were identified. All for development and also for advancement.

First of all, a CARILEC/CARICOM electricity sector energy expansion initiative. Yet it’s one to help support deployment of energy efficiency programs. As well as large scale renewables in the region.

Stimulation of a regional ESCO market through PACE program development. So loan guarantees, and training programs.

Codification of standardized efficiency “playbooks”. That’s for hospitals and hotels. That’s to ensure all sites have access to proven energy solutions.

Assembled $300+ million in funding to support the projects above with clarified pathway to access.

“From a banker’s perspective, implementation of solutions for one hospital can be quite time-consuming and complex, for a project size that is not considered individually large scale,” said Lyn Tabernacki – OPIC’s managing director of renewable and clean energy programs at OPIC. “By developing a solution that will address the major energy inefficiencies common to all hospitals, the lenders can underwrite a common technology and other common risks to fund an entire sector, rather than fund one hospital at a time.”

Hospitals use as much as twice the amount of energy as hotels of the same size do. Air-conditioning, ventilation and lighting represent over 80 percent of energy use in hospitals and standard technical solutions could save 20 percent to 30 percent in hospitals across the region.

“We see these first demonstrable projects as a pre-cursor to unlocking the barriers to scaling renewable energy across the Caribbean over the next two years,” said Jose Maria Figueres, president of Carbon War Room.

The Carbon War Room is a global nonprofit, founded by Sir Richard Branson and a team of like-minded entrepreneurs, that accelerates the adoption of business solutions that reduce carbon emissions at gigaton scale and advance the low-carbon economy. The organization focuses on solutions that can be realized using proven technologies under current policy landscapes.

Since 1982, Rocky Mountain Institute has advanced market-based solutions. One that transforms global energy use to create a clean, prosperous and secure future. An independent, nonprofit think-and-do tank.

In conclusion, RMI engages with businesses, communities and institutions. All to accelerate and scale replicable solutions. Finally, that drive the cost-effective shift from fossil fuels to efficiency and renewables.