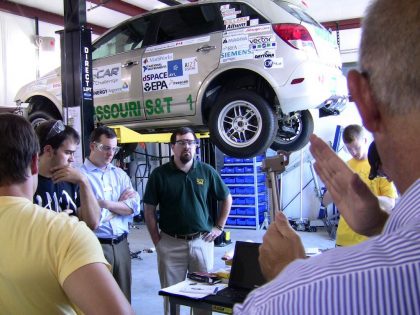 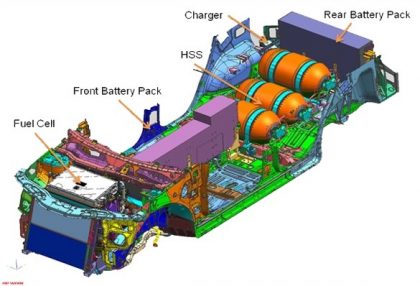 As illustrated below, the stock engine was removed to make room for the GM-donated fuel cell. In addition, the team added hydrogen storage tanks, a high voltage DC/DC Converter and a Missouri S&T designed electrical storage system which utilizes A123 Systems Inc.battery modules.

EcoCAR is a 3 year program where college students develop their best re-engineerined car with the help of General Motors and the US Department of Energy. This “three-year competition” is intended to challenge students to re-engineer a GM vehicle to decrease emissions, energy consumption and green house gases.

Missouri S&T is one of 16 collegiate teams from across North America competing in the competition to “build the car of the future,” while maintaining acceptable performance, utility and safety and is the only school in the State of Missouri participating in the event.

The future of the automobile has limitless potential, so just thinking about it can elicit giddy anticipation. From remote controlled parking to intelligent accelerators, a new adaptation is in the works for almost every detail of your car. Most of the technologies listed below have already been created or are nearing completion, meaning they could become available in the near future. It won’t be long before driving — if you even have to drive — becomes as low-maintenance, safe and easy as riding a bicycle.

The vehicle Missouri S&T’s team designed has fuel efficiency comparable to a Chevy Equinox – about 200 miles running on hydrogen alone and about 30 miles on electric power, for a combined 250 mile total range.

Missouri S&T is the only team from Missouri, with about 40 students. The U.S. Department of Energy, General Motors and Natural Resources Canada sponsor the competition.

The goal is to develop the next set of automotive engineers. Lecko explained that about 75 percent of students involved in the competition enter the auto industry after the end of the competition.

Assistant Research Professor Kevin Martin explained that the state of Missouri benefits from the competition as well. A plastics company in Springfield and machining company in St. Louis are among Missouri companies that have donated to the EcoCAR team. Martin said the research builds expertise in the state, and companies “get a glimpse into the future.”

‘We learn from them, they learn from us. There’s a mutual benefit,” Martin said.

The first year of the competition essentially involved vehicle design, the second year, vehicle modification and system design, and the third year, optimization and refinement to get the vehicle 99 percent ready for production. The development mimics GM’s production process.

Charging and Refueling Getting Serious in Missouri

There is a potential that in the future each region may use a different combination of resources to produce hydrogen depending on local resource availability. The station consists of several leading technologies including an on-site steam methane reformer and electrolyzer, steel and carbon composite storage tanks, a 350 bar hydrogen dispenser and a stationary polymer electrolyte membrane (PEM) fuel cell. Further, by integrating on-site solar and wind energy into the test bed, this site demonstrates that hydrogen is not just a clean-fuel, but that it can be produced through renewable, energy-efficient means.

If they could just add more battery and less on the fuel cell we’ll be good. However, one small step at a time; right?!

Led by Dr. John W. Sheffield, he has the research interests down pat with the EcoCAR. He likes hydrogen energy systems, industrial energy management, energy efficiency, and thermal contact conductance/resistance. 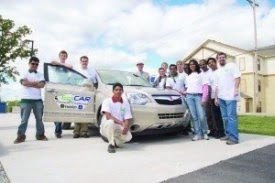