ALBANY—Albany International Airport has six new electric vehicle (EV) charging stations for airport traveler use, stemming from a collaboration by the New York Power Authority (NYPA), the New York State Energy Research and Development Authority (NYSERDA), and the Albany County Airport Authority. The installations are part of a planned statewide network of up to 3,000 EV stations slated for various public and workplace locations across New York State.

The charging stations are in support of Charge NY, a statewide initiative launched by Governor Andrew M. Cuomo in 2013 to help bring about greater use of plug-in EVs, lay a foundation for additional investments in clean technologies by the private sector, and reduce climate-changing greenhouse gas emissions. The new installations, which were unveiled at an event Wednesday, also support a recently announced Multi-State Zero-Emission Vehicle Action Plan, in which New York and seven other state participants seek to have 3.3 million zero-emission cars on U.S. roads by 2025.

The Albany Airport charging stations are the first in a series of 100 such installations that NYPA and NYSERDA are partnering on in the coming months that will be located at 37 public and workplace locations.  In late 2013, the NYPA trustees awarded a contract to an EV management services firm—EV Connect—for the installation of the charging stations, including at the Albany Airport. EV Connect has partnered with several New York firms on equipment installation, including Switch Electric of Croton-On-Hudson, Allegro Power of Buffalo, and Patricia Electric, based in Syracuse.

“NYSERDA and NYPA are working closely together on Governor Cuomo’s agenda to increase zero-emissions vehicles in New York State,”said John B. Rhodes, president and chief executive officer, NYSERDA. “This partnership is one way we are supporting programs to protect the environment, reduce the use of fossil fuels and build the clean-energy economy in New York State.”

“We are grateful to Governor Andrew Cuomo, the New York State Energy Research and Development Agency and the New York Power Authority for their investment in the future of energy efficient electric vehicles,” said Rev. Kenneth Doyle, chairman of the Albany County Airport Authority.  “The new charging stations at Albany International Airport will offer a convenient opportunity for our travelers to easily recharge their vehicles while parked in our long-term lot and parking garage.”

The six Albany Airport charging stations—three in the main parking garage and three in long-term parking—are each capable of supplying up to 6 kilowatts of power to an electric vehicle. Charge times will vary depending on the size and type of car, but for mid-sized cars (e.g., the Chevrolet Volt, Ford C-MAX Hybrid Energi or Nissan Leaf), charging is expected to take approximately four hours. At the Albany Airport, EV drivers will be able to charge their cars without cost for a two-year trial period, after which there will be a nominal fee.

The charging stations are equipped with software that will allow users to remotely monitor the charging process as well as pay for the battery charge, if applicable. The software will also collect and transmit data on frequency of use, length of charges and amount of energy dispensed, to allow NYPA and NYSERDA to refine details of the process for future charging installations.

Since 1995, NYPA has played a significant role in developing and expanding electric-drive vehicle use in the state, including electric-powered baggage tractors at the Albany Airport.  The Authority’s efforts have led to the placement of more than 1,300 electric, hybrid and plug-in hybrid EVs in the fleets of public entities across the state as well as in its own fleet of vehicles. 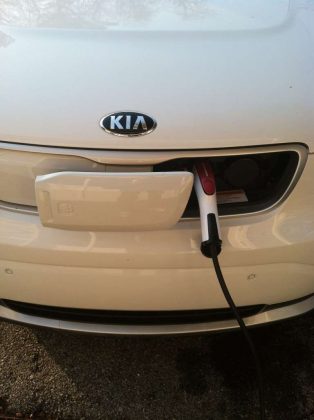 Since 2012, NYSERDA has been working through public-private partnerships toward the goal of installing 900 charging stations across New York at locations such as municipalities, city streets, supermarkets, hotels and parking garages.  NYSERDA offers the New York Electric Truck Voucher Incentive Program, which helps offset the extra cost of investing in electric trucks for fleet use. In addition, NYSERDA supports research and demonstration projects to promote EV investment, and has led an 11-state group to develop EV-station best practices for local governments.

“Decreasing our dependence on foreign energy and boosting the green-collar job market must include efforts on the local level, and I am excited to see more investment in sustainability here at Albany International,” said Congressman Paul Tonko. “I am hopeful that Gov. Cuomo’s Charge NY initiative will serve as an example to other states as to what responsible investment in environmental sustainability can mean to our economy, our environment and our job market. When private and public sectors work together, everyone wins.”

“The availability of these electric charging stations will be key to helping our state transition to new energy alternatives that are more environmentally-friendly and reduce our reliance on foreign oil,” said Senator George Maziarz, chairman of the Senate Energy and Telecommunications Committee.  “The more safe and cost-effective options we can give New York motorists for powering their cars, the better.”

These electric vehicle charging stations are a great step toward lowering emissions and reducing our carbon footprint,” said Assemblymember Phil Steck. “Like many others, I drive a hybrid vehicle that features this plug-in feature.I have used these charging stations in other cities, and I look forward to using them here so that our community can contribute to the betterment of our environment.”

“Under the leadership of Governor Cuomo, the Charge NY initiative will usher in a new era in green energy,” said Daniel P. McCoy, county executive, Albany County. “The partnership between the Albany International Airport, NYPA and NYSERDA will help reduce carbon emissions and provide an incentive to those using green technology to power their vehicles.”

“It’s exciting that the first Charge NY charging stations will be located in Colonie.  We all have a part to play in New York’s energy future, and creating 100 new charging stations is a great step forward,”  said Paul A. Mahan,  supervisor, Town of Colonie.  “I thank NYPA and NYSERDA for their leadership in moving us closer to realizing Governor Cuomo’s goals for a sustainable future.”