San Francisco, CA – National group Rainforest Action Network is taking to the streets of San Francisco tomorrow to protest Pepsi’s links to rainforest destruction. As well as climate pollution and human rights abuses through its large scale use of Conflict Palm Oil. Last night, for the opening of Superbowl City, RAN used high tech equipment to project Pepsi’s iconic logo juxtaposed with images of severe deforestation connected to the company’s supply chain onto high profile locations in downtown San Francisco. Dozens of local protesters are also rallying at the SF Ferry Building against Pepsi’s inadequate palm oil policy before marching to Pepsi’s Market Street headquarters to bring their message to the company directly.

PepsiCo is a major sponsor of the 2016 Super Bowl 50, with the Pepsi-branded halftime show and is the largest globally distributed snack food company in the world. Rainforest Action Network and online advocacy group SumOfUs are also planning to hijack Pepsi’s halftime show with a thunderclap sharing a viral parody video that has had over 25 million views since its release last Super Bowl. The video exposes the connection between Doritos, a Pepsi product, and rainforest destruction from palm oil production. 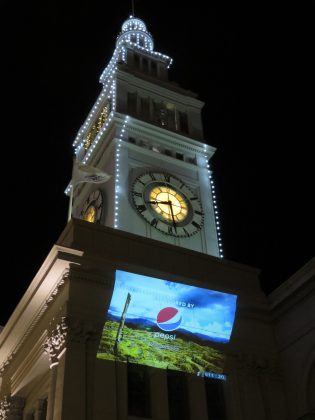 “There is no excuse for Pepsi to continue to drag its feet. All the while its peers move towards addressing the serious environmental and human rights crises. Those being caused by global palm oil production,” said Gemma Tillack, a palm oil campaigner with Rainforest Action Network. “Pepsi was alerted to urgent problems in its palm oil supply chain over two years ago. Moreover and since that time tens of thousands of people. For we have written, emailed, called and posted demands on social media for Pepsi. All to do the right thing. Pepsi now risks serious damage to its brand. Because by refusing to implement a comprehensive palm oil purchasing policy is wrong. All to assure its customers it will no longer use Conflict Palm Oil.”

PepsiCo is the largest and most influential of the “Snack Food 20” companies targeted by Rainforest Action Network. That’s for their palm oil abuses. Those that have yet to take the necessary steps. Moreover to solve its Conflict Palm Oil problem.

So in response to mounting international criticism of its lack of a robust palm oil policy, Pepsi moved. For it issued an updated palm oil commitment last year. However it does not require the palm oil supplier and sole maker of Pepsi branded snack foods in Indonesia to comply. Activists say this new policy all but ensures worker exploitation.

In conclusion and as well as social conflict and forest destruction. Things that will continue to be part of the company’s supply chain.