Join the EMA for a panel discussion covering the recent ranch spill. Also the impact of domestic environmental disasters on this year’s election and the role of policy and innovation in cleaning up our country. 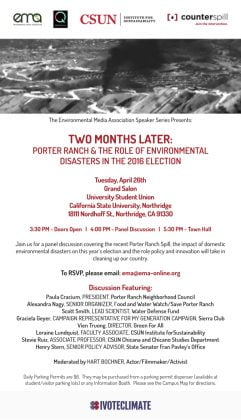 Vien Truong, DIRECTOR, Green For All

According to EMA Sources:

I hear that either Matt Peterson or someone from SoCal Gas is going to show up too for a counter point.  it should be a real barn burner.  first town hall near porter ranch in a month and half

EMA serves as a valuable link between the world of media and the environmental community, working tirelessly to bring the planet’s most pressing issues to the forefront and make true change by inspiring millions of people across the globe to live sustainable lifestyles and to use their voice to help our planet.