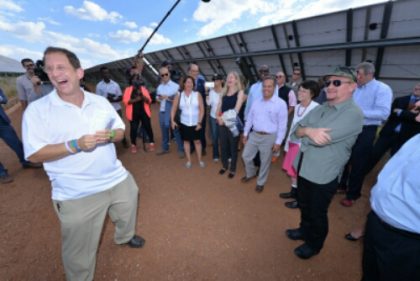 Yosef Abramowitz says that 100% of the day-time energy needs of Israel, the Palestinians, and Africa can be powered by the sun. Here sharing a light moment in Rwanda with U2’s Bono, at East Africa’s first commercial scale solar field. (PRNewsFoto/Energiya Global Capital)

Yosef Abramowitz says that 100% of the day-time energy needs of Israel, the Palestinians, and Africa can be powered by the sun. Here sharing a light moment in Rwanda with U2’s Bono, at East Africa’s first commercial scale solar field.

JERUSALEM, June 9, 2016 /PRNewswire/ — Israel’s national prize for climate and green energy — the Green Globe — was awarded yesterday in the Knesset to impact investor Yosef Abramowitz, a pioneer of the solar industries in Israel, Africa, the Middle East and the southeastern USA.

Abramowitz, who served as a member of the Israeli delegation to the Paris Climate Conference, is marking the completion of his 10th commercial scale solar field in 10 years. He currently serves as CEO of Energiya Global Capital.

The 17.6 MW field, in Glynn Country, GA, will be interconnected shortly.

In accepting the award, Abramowitz called on the Israeli government.

All to specifically the Finance Minister and Tax Authority — to open up the solar quotas. Moreover and to end the deliberate bureaucratic obstacles for citizens. So they can to put solar panels on their roofs.

Calling on Moshe Kahlon, the Finance Minister and interim Environmental Minister, to “break the monopolies of the Israel Electric Company and the tycoons,” Abramowitz claimed that to do otherwise “undermines the environment and the economic interests of the citizens.” He also called on Kahlon. Especially to appoint MK Rachel Azaria (Kulanu) to serve as Environment Minister.

Abramowitz painted a vision of Israel’s energy being provided 100 percent during the day from solar by 2022, with natural gas at night, serving as a model for Africa, the Middle East and the world. “Much like we have done from the Red Sea to the Dead Sea, which is 65% solar powered during the day and will reach 100% by 2020,” said Abramowitz.

Because then if the solar quotas are lifted on commercial scale fields it’s all good. Because then all citizens can put solar on their roof-tops. Moreover also 1,000 MW be set aside for the Bedouin.

So then they and others will commit to invest $10 billion over five years. That’s most noteworthy and well more than gas giants Noble Energy and Delek combined. All into the “periphery without greenhouse gas emissions or air pollution.”