The US electric car market and car sales has continued to grow at a rapid pace in the past year. It’s led by California’s particularly strong electric car market, of course. From January through August, sales of 8 fully electric cars* grew 47% in the country. Sales of 6 plug-in hybrid cars were up 30%. Overall, that meant sales of these 14 plug-in car were up 40%.

August 2017 vs August 2016 was less dramatic but still a period of strong growth. Fully electric car sales were up 19%. Plug-in hybrid sales were up 4%. Overall, that meant a 13% increase in plug-in car sales. If the Tesla estimates** are to be believed. Because the Tesla Model S was far ahead in the #1 spot. Then the Chevy Bolt held tight at #2, the Toyota Prius Prime rose to #3. In addition the Tesla Model X dropped to #4. Finally and the Chevy Volt and Nissan LEAF retained their places at #5 and #6. That’s respectively. Ah, gone are the days of the neverending LEAF vs Volt battle. Yet at the top of the charts (which was a super tight competition for years).

If you look at the January through August car sales stats (which are educated estimates** but certainly not exact). Again the Model S is crushing it (despite its high price tag). That hints at how extremely competitive the car is in its niche segment.

Moreover, the Volt has a slight lead over the Model X. All which has an even slighter lead over the Toyota Prius Prime. The Chevy Bolt has a gap to cover to catch up with any of those models, but now that sales are picking up and availability is nationwide, it has potential to climb up the ranking and perhaps even land on the podium by the end of the year. 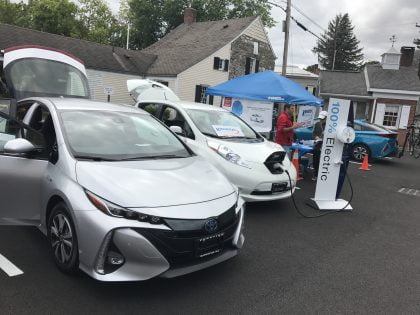 We can surely expect electric car sales to keep increasing as Tesla Model 3 production ramps up, the next-generation Nissan LEAF arrives on dealer lots, and overall EV awareness rises. I would be surprised if our report one year from now doesn’t show a more dramatic electric car sales increase of 82% at this point in time.