The efficiency of the 2018 Mercedes E400 Coupe with 3.0 V6 Biturbo was more than the doctor asked for. It could have been a V4, frankly but starting at $54,000, it better has a kitchen sink. With all the bells and whistles and connectedness to the road got up there to $70,000, but it stood out. No joking. I was getting applauded by drivers on the Bronx River Parkway, and I don’t mean an FU applause as you’d expect in the Bronx, NY.

It was 35 MPG on the highway, tested and approved. The city was 29.  All of this was in the ECO mode to get the best I could get. Yet this car needs to be a Plugin hybrid electric or Electric stat!

It has a gliding mode which easily helps regroup on MPG. Yet, this car has everything except the battery pack for MPG recoup and assist. It’ll be such an MPG Breakthrough vs. just a technological breakthrough. Now, let’s get back! The comfort package with the heated and or cooled seats that massage you while driving like you’re in Brookstone stores in the mall. 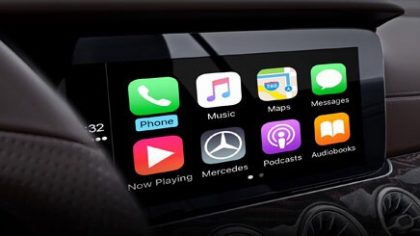 As Motor Trend added, the test car had AMG Line visual upgrades that don’t translate to better at-the-limit performance. Motor Trend’s testing director Kim Reynolds commented on the car’s “slow response to throttle” and said it was “hard to control the understeer.” This is the type of behavior you’ll find close to the car’s limits, and if you’re really seeking out the limits of your luxury coupe, smaller and sportier entries, including the Mercedes-AMG C43 and Audi S5, might be more your style. 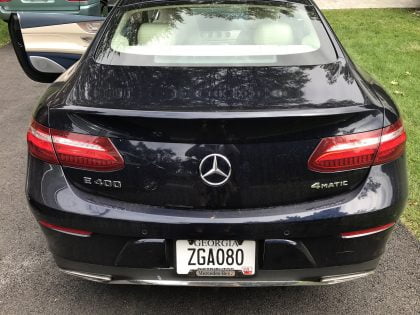 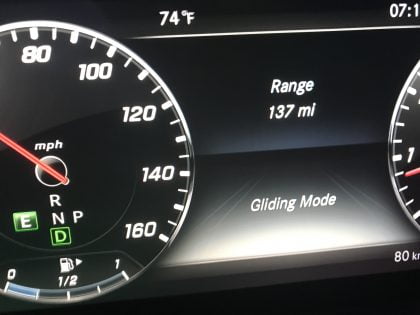 This Mercedes shines as a boulevard cruiser. If you take some friends out to dinner, they’ll access the back seat by pulling a lever on the edge of the front seat that folds the backrest forward, at which point the seat automatically powers forward and up a little bit. 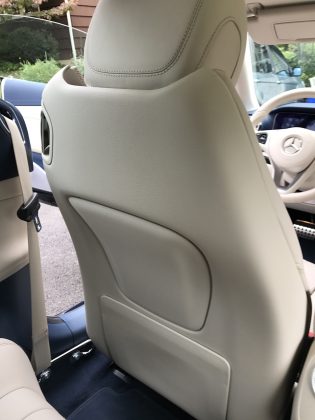 In the rear seat, there’s actually a decent amount of legroom, plus some extra space for feet under the front seats. Those rear bucket seats are comfortable enough, though there’s no central armrest, and rear headroom is limited by the way the roof slopes downward toward the car’s rear. What might really keep the rear seat from being used for more than 30 minutes at a time—especially for passengers who get claustrophobic—is the small size of those rear-side windows. You wouldn’t sacrifice the coupe’s styling for a practical concern like that, though, right? 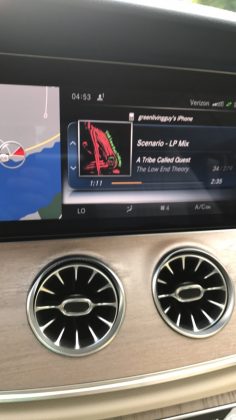 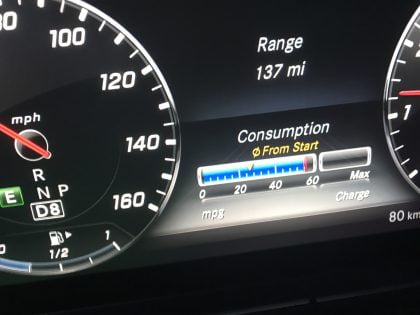 The E-Class has its industry-leading Car-to-X Communication, every new E-Class can automatically alert a central notification system of certain dangers, from detected wheelspin to the use of hazard flashers or even windshield wipers. The system can then alert other drivers with Car-to-X via in-dash displays or announcements, allowing precautions to be taken before reaching the hazard. 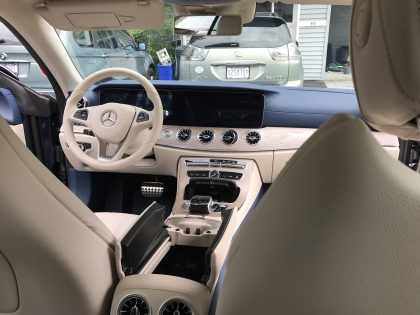 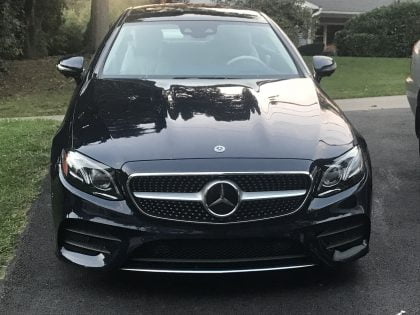 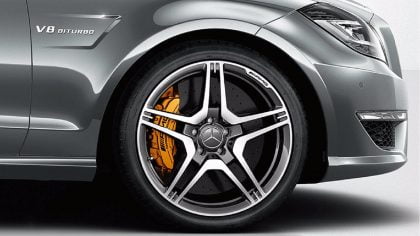 The E400 4MATIC Sedan will feature all the standard equipment of the E300 Sedan, with standard all-wheel drive and a 3.0L biturbo V6 engine producing 329hp and 354 lb-ft of torque – the same powertrain as the E400 Coupe, coupled with the 9G-TRONIC 9-Speed Automatic Transmission and DYNAMIC SELECT, the E400 4MATIC Sedan will boast smooth, luxurious power. Then add the AMG Package for that AMG Black MB-Tex/DINAMICA with Red Stitching upholstery wasn’t there because of these looks.

Car and Driver added which I thought was funny because I felt the same way in part. Coupes naturally are smaller, but this E-class coupe is more practical than its smaller ones. Still, the back seat accommodates just two. At least the back seats look amazing with new air vents and optional light-brown open-pore wood for $150; several coupe-specific leather and wood trim options are available. The rest of the interior is pulled straight from the E-class sedan.

No sheetmetal is shared between the E-class sedan and coupe. Mercedes-Benz design chief Gorden Wagener has said, “The time of creases is over.” Thus we see smooth fenders and flanks on the E-class coupe. As smooth as Henry Moore’s later sculptures, the soft body culminates in a slightly dovetailed rear end. The shape appears elegant and expensive, if familiar. It’s so familiar that it’s a challenge to tell the E-class coupe from the C-class and S-class two-doors. 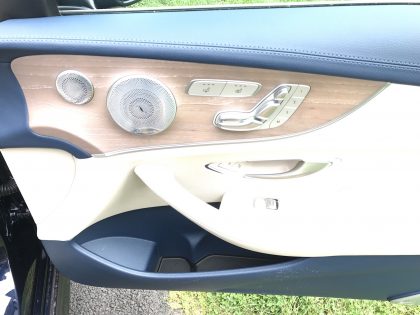 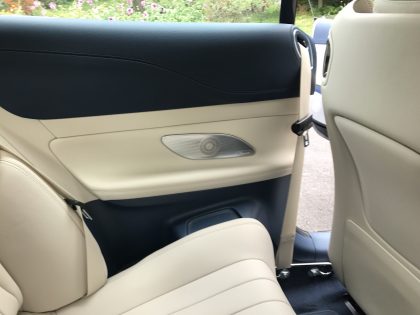 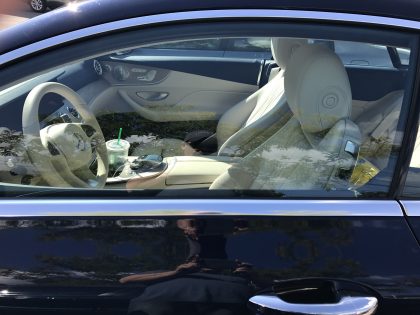 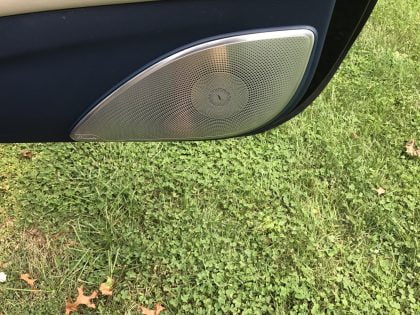 As Bloomberg reports, the E400 is also slower than what will likely be its biggest competitors, the BMW 3-Series Sedan and 4-Series Coupe and the Audi S5 Coupe. It’s slower even when engaging the “Sport+” version of its five total drive modes, which alters throttle response, shifting, and the available air body control suspension.
You’ll still have plenty of power to work with: Zero to 60 miles per hour takes 5.2 seconds on automatic. For most drivers, that’s plenty. Anyway, the car is fun to drive. Around corners and in a straight line, the E400 is accurate and controlled. It justifies the middle-range $58,900 starting price for a performance coupe, and it looks like it costs more. 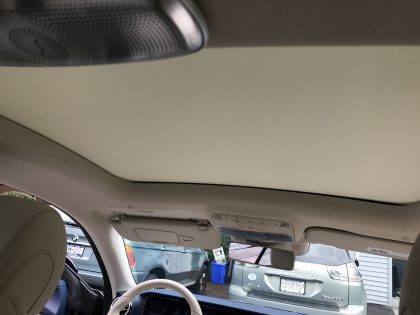 The all-new E-Class Coupe has grown in all dimensions compared to its predecessor—its rear legroom providing a true grand-touring experience with uncompromising safety, practicality, and comfort for four adults to travel in style. The E-Class Coupe builds on the E-Class Sedan innovations and next- generation driver assistance systems. Panorama roof is standard, which along with the pillar-less side glass, imparts a light and airy atmosphere to the interior.

I did love the car, yet it needs batteries for a 50-75 mpg like the BMW 3 Series has. So this puppy has no electric anything, but boy, was it a beast! It didn’t tear off the line, but it handled NYC traffic just fine and without a scratch. Also two thumbs up on the Apple Car play made easy. No sync junk. Just instantaneous. That ease and luxury you can expect from this Mercedes E400 with AMG tire sport package. It’s competitively priced versus some other luxury brands with everything inside this car. Yet once it perfects the MPG game, watch out!