NEW YORK, OCTOBER 26, 2017 — Every fall, approximately 10,000 tourists from around the world descend on the tiny, isolated town of Churchill, Manitoba. Known as “The Polar Bear Capital of the World”.  For visitors gather in Churchill to see the annual migration of more than 1,000 polar bears. All that pass through town. Smithsonian Channel’s docu-series!

POLAR BEAR TOWN follows this extraordinary intersection of humans and the “Lords of the Arctic”..For as they collide in unexpected and sometimes dangerous ways. 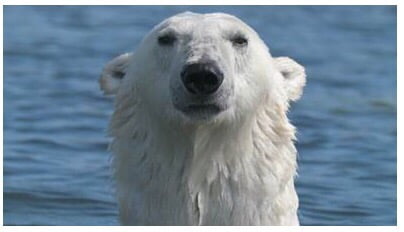 This season kicks off with summer in POLAR BEAR TOWN. Tourists flock to town to see thousands of beluga whales crowding the bay. However this year, an increasing number of bears have arrived in town. Moreover earlier than usual. While it may prove to be lucrative for the guides who take tourists to see polar bears, it makes life much more dangerous for locals.

Although when his No. 1 client wants to get a risky picture of a swimming polar bear above and under the water, he gets worried. The lure of a polar bear bonanza also brings Kelsey back to Churchill, but when he happens upon a mom and cub swimming toward town, he steps in to try to keep them from getting too close. If the bears reach their destination, it could be disastrous for them – and the locals. At the Mile 5 Dog Sanctuary, Brian Ladoon is set on protecting his dogs from swarms of summer insects, but a tragic bear incident catches him off guard.

THE SEARCH FOR BIG BEAR

After a large polar bear known as Big Bear kills one of Brian Ladoon’s dogs right in town, the community is on edge. Everyone wants this bear found before another victim is claimed. Conservation is on high alert while Dennis and Andrew use night-vision cameras to look for the elusive bear. That’s because if they can identify Big Bear’s path into town, it could help in catching him and keeping both the bear and the community safe. While locals try to avoid the bears, Kelsey and his crew have found a way to get closer to them. All in a rundown cabin on the shores of Button Bay. After a sudden storm means an overnight stay for the group, the dilapidated shack is the only thing between them and waves of migrating polar bears.

Summer is coming to an end in Polar Bear Town, and belugas whales are on the move. Now, only the locals and polar bears remain, and there’s plenty to do before the onset of fall. Dennis and Andrew are on a treacherous journey to find an uninhabited island where bears and belugas are rumored to be found in abundance. Kelsey and Karine fly to a remote camp on the hunt for bears that have little human contact. Traveling to a remote lodge on the fringes of Hudson Bay. All to observe these wild bears as a result in their native habitat. All because they have to be ready for anything. Especially when they come face-to-face with a group of these dangerously unpredictable bears.

Moreover miles from any help.

Renowned polar bear scientist Robert Rockwell ventures deep into the heart of polar bear country in search of bear DNA while conservation officers release Big Bear from polar bear jail and helicopter him back into the wild. Finally, as the days grow shorter, a local couple takes to the high seas in hopes of incorporating bears and belugas into their unique wedding ceremony.

In conclusion, POLAR BEAR TOWN is produced by Merit Motion Pictures in association with Earth-Touch for Smithsonian Networks. This is with financial investment from Manitoba Film & Music and the participation of the Manitoba Film & Video Production Tax Credit and the Canadian Film or Video Production Tax Credit. Executive producers are also Merit Jensen Carr and Phil Fairclough. Joy Galane and David Royle. For they serve as executive producers for Smithsonian Channel.

Smithsonian Channel™, owned by Smithsonian Networks™  It is a joint venture between Showtime Networks Inc. and the Smithsonian Institution