WASHINGTON, Aug. 31, 2017 /PRNewswire-USNewswire/ — Washington, DC, was named the first LEED for Cities Platinum city in the world. Mayor Bowser is receiving this honor by Mahesh Ramanujam, President and CEO of the U.S. Green Building Council (USGBC), at an event on the steps of Dunbar High School – the highest rated LEED-certified school in the United States. The Mayor and Ramanujam were joined by Mayor Bowser’s Chief Technology Officer, Archana Vemulapalli, and Jay Wilson, the District Department of Energy and Environment’s green building expert.

“It is in the best interest of Washington, DC’s safety, economy, and future to take sustainability and resiliency seriously, and as the nation’s capital, we have a special obligation to lead the way on environmental issues,” said Mayor Bowser. “We are proud to be recognized as the world’s first LEED Platinum city. Our commitment to these issues will not yield, and we look forward to continuing to build a greener, more resilient, and more sustainable DC.” 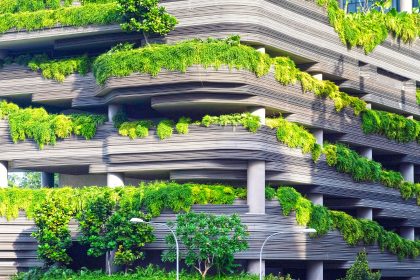 LEED (Leadership in Energy and Environmental Design) is the most popular green building rating system in the world. Its goal is to help buildings achieve high performance in key areas of human and environmental health. Moreover, LEED for Cities was launched last year and enables cities to measure and communicate performance, focusing on outcomes from ongoing sustainability efforts across an array of metrics, including energy, water, waste, transportation, and human experience (which includes education, prosperity, equity and health & safety). LEED for Cities projects benchmark and track performance using Arc. It’s a state-of-the-art digital platform that uses data to provide greater transparency. That’s into sustainability efforts and helps cities make more informed decisions.

Washington, DC’s LEED Platinum certification recognizes the outcomes, rather than intent, of the city’s leadership in creating a sustainable and resilient built environment, which includes: reducing greenhouse gas emissions, supporting clean energy innovation, and focusing on inclusive prosperity and livability in all eight wards.

“Washington, DC is setting the bar for smart cities all around the world by leveraging technology and data to achieve sustainability and resiliency goals, creating healthy and safe communities where citizens can thrive,” said Mahesh Ramanujam, President and CEO at USGBC and GBCI. “Mayor Bowser and the city are once again showing that our nation’s capital is performing at the highest levels and that its buildings, neighborhoods and communities are as sustainable as possible.”

The District looks to achieve the goals of the Sustainable DC Plan and the targets of the Paris Climate Accord. Tracking and improving upon the city’s progress is essential. As part of achieving these goals, under Smarter DC, the Office of the Chief Technology Officer works to develop more open access to data. LEED for Cities will be a valuable tool in these efforts.

“Smarter DC is fundamentally about leveraging technology strategically to deliver a more sustainable, resilient, equitable, and healthy city transparently,” said Chief Technology Officer Vemulapalli. “This recognition was only attainable by working together to deliver real outcomes for the District.”

Throughout the Bowser Administration, Washington, DC has served as a leading city on issues of sustainability. Over the past two and a half years, the Administration has released Climate Ready DC. It has also entered into one of the largest municipal onsite solar projects in the United States. Not to mention the completion of the largest wind power purchase agreement deal of its kind by an American city. Moreover, it also launched Sustainable DC 2.0. Additionally, there’s the signature of a Mayor’s order pledging to uphold the commitments in the Paris Climate Accord. Today, 65 percent of DC neighborhoods are walkable. Moreover, 58 percent of commuter trips are by bike, walking, or public transit. 100 percent renewable energy powers the DC Government. And DC is on track to derive at least one-half of the entire city’s electricity from renewable resources by 2032.