The last time I test drove the BMW i3 electric was in 2015. Actually, it was Super Bowl weekend; when they launched the car with Bryant Gumbel and Katie Couric. The commercial tried to show how this vehicle Is ICONIC comparing it to their discussions about the internet on the Today Show.

To prove it, here’s a copy of the page on Instagram. It was funny because the day we got the car there was no snow, then you see this which was the day after the Super Bowl.

So even though the EV range was limited, the i3 today is able to recharge and fast charge. Speed up now to 2017 (July / August) and here the newer version with that 94Ah which are amp hours and a Range Extender Package too. The range extender is a gas component connected to a 34hp motor that powers the electric motor. Therefore, the electric motor powers the entire car. So while things look the same on the outside, it’s not the same car from 2015.
The batteries are located underneath the car (at the bottom of the car which makes this electric vehicle hug the ground and be more stable) and also went from 0 to 60 mph in around 6.5 seconds. The EPA estimates a battery-only range of 114 miles yet folks we got ranges closer to 125 to 150 so again I don’t know what the EPA is talking about!.

To start, let’s show you the beautiful inside here with the doors of steel; or should I say carbon fiber. Those lines in the door area are all carbon fibers. They are very light but don’t try to punch the frame because you’ll break your fingers. Carbon fibers are extremely strong and further ensure safety with fuel economy. There are carbon fibers everywhere in this car where steel or aluminum might have been. Without a doubt a much safer and better choice.

..EPA estimates a battery-only range of 114 miles yet folks we got ranges closer to 125 to 150 so again I don’t know what the EPA is talking about!.

To start, let’s show you the beautiful inside here with the doors of steel; or should I say carbon fiber. Those lines in the door area are all carbon fibers. They are very light but don’t try to punch the frame because you’ll break your fingers. Carbon fibers are extremely strong and further ensure safety with fuel economy. There are carbon fibers everywhere in this car where steel or aluminum might have been. Without a doubt a much safer and better choice!

Now there were a few cool things about the car and some things which were difficult since it was a demo car. Back then, I was not able to re charge the battery but could refuel. So I said ok! It was loud and noisy 1hp gas motor directly powering the electric motor. It was also in the winter too, but here’s the trick. It was roomy , spacious and comfortable in the middle of a New York winter. We were able to recharge the car off the fuel so it did have a 70 plus mile range with another 75 miles of range.

thanks to Chris Neff for counsel on EPA and motor specs. 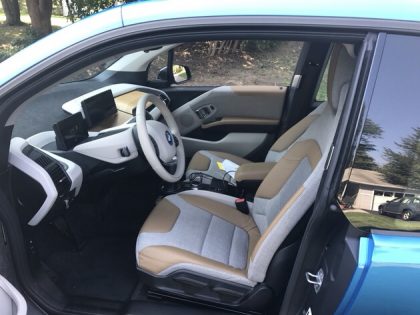 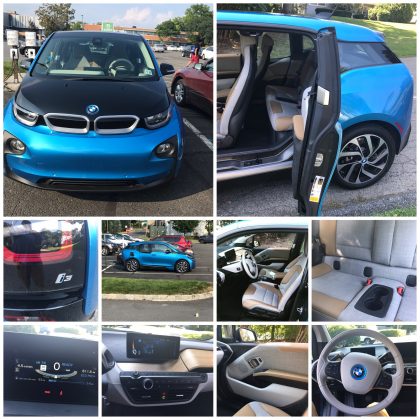 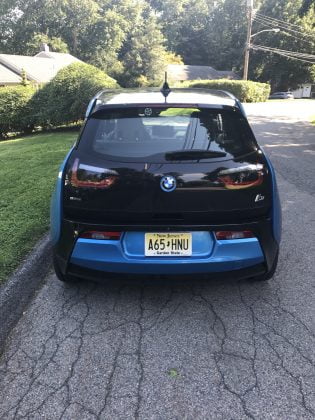 The interior is a whole other experience in this car. As US News and World Reports, he i3 has seats for four, and there’s plenty of space no matter which seat you choose. The front seats are comfortable and mounted high in the cabin, giving those in the front a commanding view of the road ahead. The back seats have sufficient head- and legroom, but getting into them is complicated by the i3’s suicide-style rear doors. You must first open the front door before you can open the back door. The i3’s floor is fairly high off the ground, making it a bit tricky for children or passengers with mobility issues to climb in.
Also the cabin “combines eco-friendliness with a futuristic design that matches the EV’s state-of-the-art powertrain. The cabin has smart styling that’s fitted with green materials like recycled cloth and responsibly forested wood trims. Most of the cabin feels high-end, but depending on your tastes, you may find that some of the recycled materials feel more low-rent than the trim pieces used in other German-badged vehicles.”

Manufactured in BMW’s most sustainable auto plant, the BMW i3 production process uses 50% less energy and 70% less water — and that’s just the beginning. The interior uses cutting-edge architecture and over 25% of renewable and recycled materials. Up to four passengers can enjoy its spaciousness—equivalent to the BMW 3 Series. Plus, the LifeDrive architecture allows for the B-pillar and center console to be removed, creating even more openness.
Now what’s wrong with the car?
Cost. It doesn’t compare with the competition. Even some Plugin hybrids it doesn’t compare to. So if you want the spacious foreign electric car this is for you. Yet if you don’t want to pay a premium there are other options and you probably are headed in that general direction. However, $329 a month ($3,000 down) for a lease wouldn’t be so bad I guess.
Other cool Features
The BMW i3 uses the BMW eDrive rear-wheel drive powertrain previously found on the BMW ActiveE. eDrive offers driving dynamics. Power is sent to the rear wheels through a single-speed transmission, allowing the BMW i3 to accelerate with an uninterrupted flow of power up to its top speed.
Its small size had an amazing turning radius in the City of NY making parking in tight spaces much easier. Its sharp turning radius and nimble handling are the perfect match for city driving. In the front, the Slide Through Experience allows the driver to slide through the car and exit on the passenger side, to avoid exiting into a busy city street. This is made possible because of the absence of the transmission tunnel. The coach doors make getting into and out of the car much more practical by eliminating the B pillar and creating one large opening to enter and exit.
So again if you want a $40,000 comfortable, easy to charge and smooth electric car, the BMW i3 is for you! 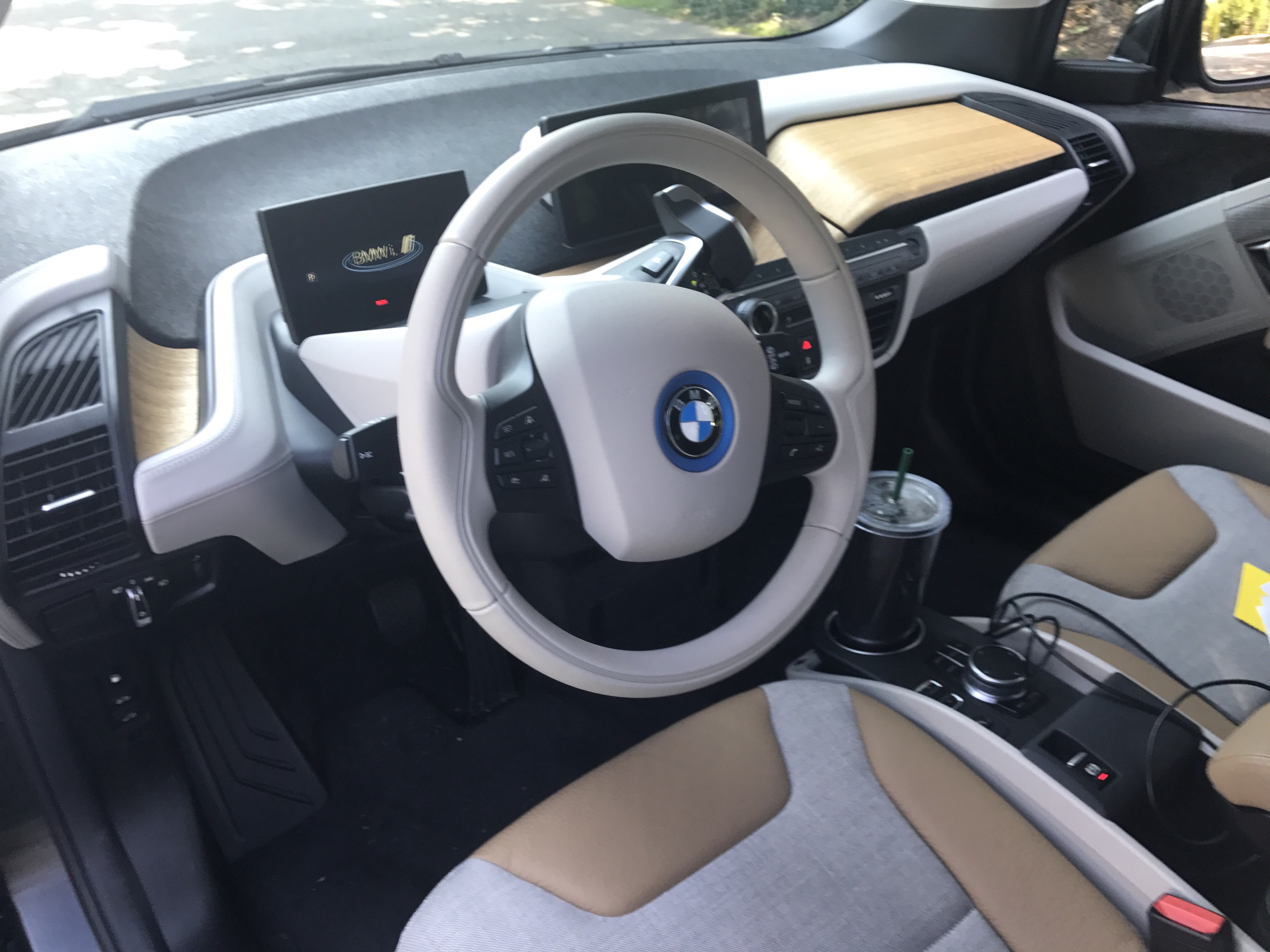 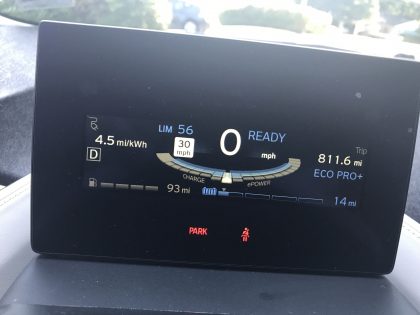 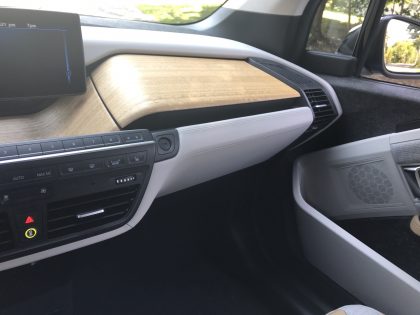 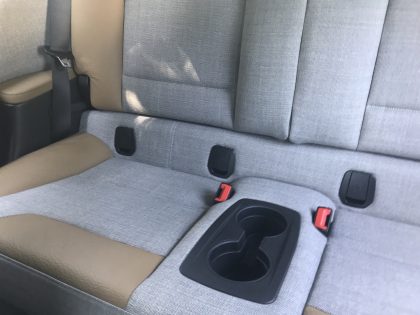 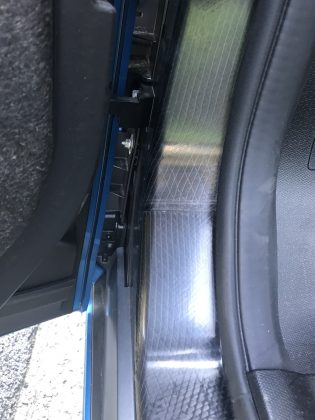 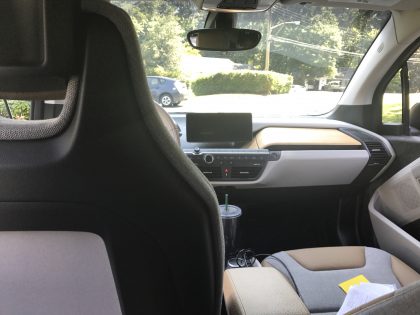 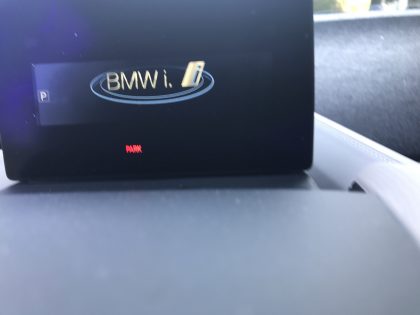 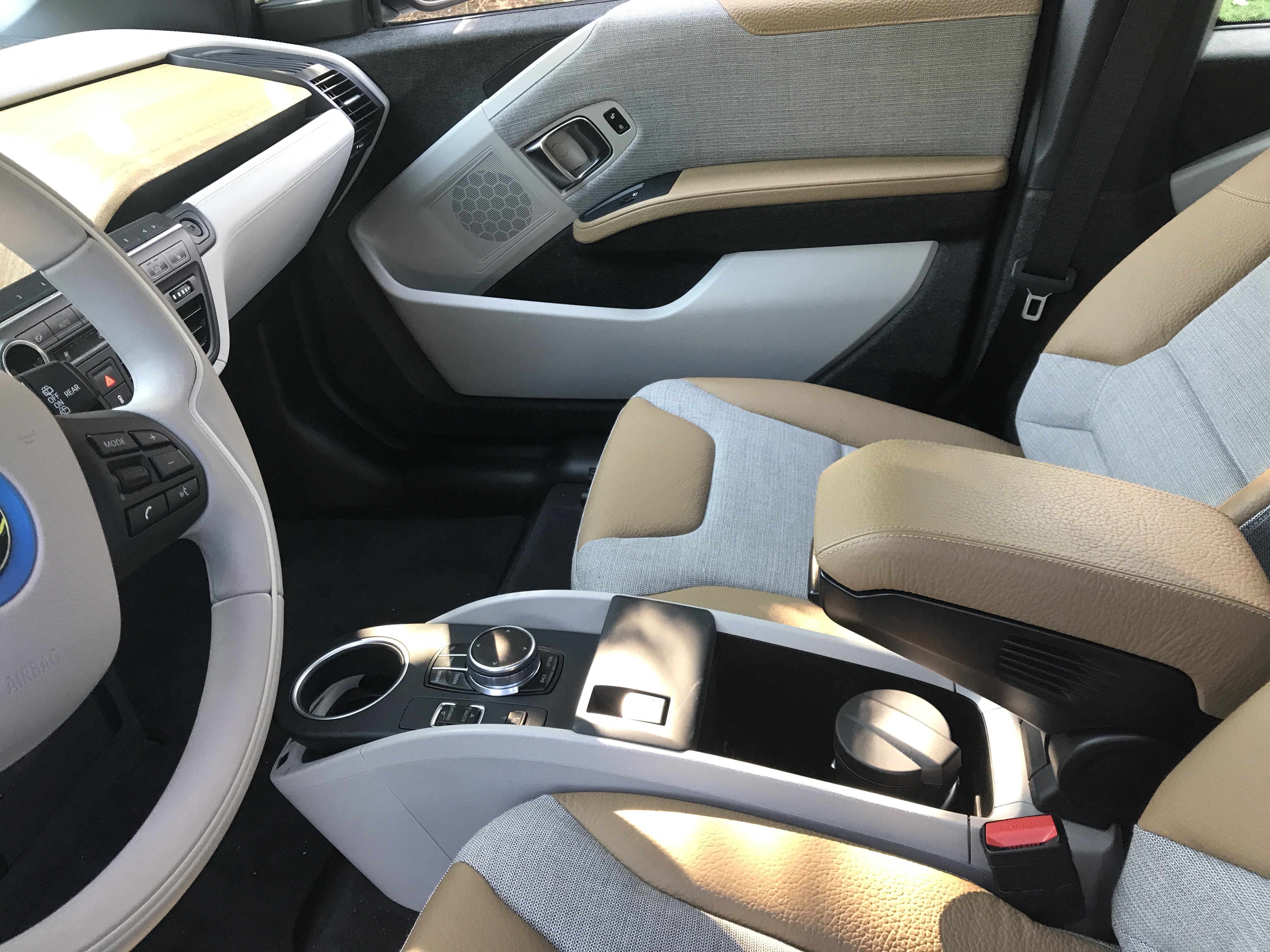