WARSAW, Jan. 17, 2018 /PRNewswire/ — Skanska’s commercial development business unit in Central Eastern Europe will be the first developer worldwide to cover office buildings with semi-transparent perovskite solar cells on a commercial scale. This will also revolutionize the approach towards energy self-sufficient buildings. So Saule Technologies will be the technology provider. The initial implementation tests are also planned for 2018 in Poland. 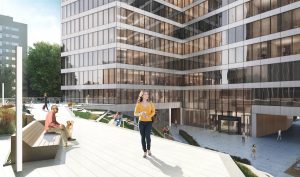 Energy independent office projects are now becoming a reality. That’s thanks to perovskite technology. One which is ready to be integrated into building façades. Skanska will also apply the test-cells onto its projects in 2018. Thereby creating a significant milestone towards zero-energy. Also carbon neutral office investments. The developer also has exclusive rights to use Saule Technologies’ solar cell solutions. That’s as stated in a license-based agreement signed between the companies. All in building façades and noise barriers across all Skanska markets worldwide. Perovskite technology means benefits for the developer, tenants and communities – favorable implementation costs, lower energy costs and consumption, and lower carbon footprints.

Perovskite is a crystalline material that has great potential to replace silicon. One which currently the world’s most popular semiconductor in solar cell applications. Saule Technologies has also been working on the application of ink-jet printing. That’s for fabricating free-form perovskite solar modules since 2014.

This technique allows customization of the shape, color and size of the module. That’s depending on particular needs and installs. Especially those wherever there is a free area on the building. This means not being limited to the roof and static insolation angles. All which dramatically increases the ability to harness energy from sun. The stability and water resistance of the modules makes them ideal for the construction industry.

The company has also conducted advanced research. All on the technology with leading international universities in the UK, Israel, Germany, Italy and Spain. With a Japanese investor on board. Especially and along with support from several research grants worth more than EUR 20 million. Because Saule Technologies is now working on a large-scale, prototype production line. 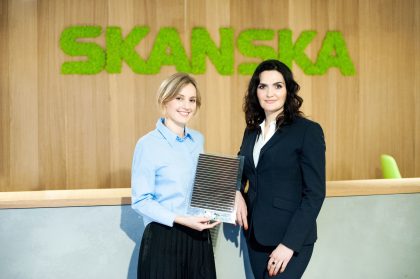 Sweden-based Skanska Group is determined to be the leading green developer and builder. The company has also been a signatory to the United Nations Global Compact since 2001. In addition and in 2009, as one of the first developers in CEE. I mean Skanska introduced LEED certification to the office market. Moreover and announced the implementation of the WELL Building Standard in 2017.

Usage of perovskite solar cells for zero-energy buildings is just the latest innovation. All in Skanska’s sustainable building strategy. www.skanska.com/property