NEWPORT BEACH, Calif., Feb. 20, 2018 /PRNewswire/ — What began as a project to remove a single contaminant from a degraded urban creek ended as a comprehensive program to restore the creek to its native condition and improve the quality of water it carried to an environmentally sensitive coastal region — completing the expanded scope while maintaining the City of Newport Beach’s budget.

Now the project has been honored as among the state’s finest engineering projects. 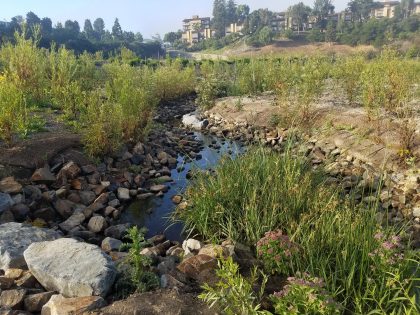 Plants and animals thrive as clean water flows in and along Big Canyon Creek, a valued urban corridor in Newport Beach. the Big Canyon Creek Restoration and Water Quality Improvement Project, planned and delivered by Burns & McDonnell, is a winner of an Honor Award in the Water and Storm Water category from the California chapter of the American Council of Engineering Companies. The chapter presented its 2018 Engineering Excellence Awards earlier this month.

Big Canyon Creek, which drains into Upper Newport Bay Ecological Reserve, first raised concerns among city officials more than a decade ago when testing found it contained elevated levels of selenium — a naturally occurring element that is toxic to wildlife at high concentrations. But when given the option to redirect the water in the creek into a treatment unit that would remove the selenium, the officials hesitated.

“The cost was high, and the solution did nothing to address the pollutant-laden stormwater runoff from nearby Jamboree Road and other issues that contributed to creek’s impaired condition and poor water quality,” says Steve Gruber, from Burns & McDonnell, who served as project manager of the $2.3 million project.

Later, Burns & McDonnell learned of an Orange County Transit Authority grant program that funded the removal of transportation-related pollutants that entered local waterways during storm events. Working closely with city staff, Burns & McDonnell wrote a grant proposal for — and ultimately was awarded — a $2.3 million grant to remove such pollutants from Big Canyon Creek.

While the grant funds were designated for transportation-related pollutant removal, engineers envisioned a dual-purpose solution that would treat those pollutants when it rained — and help to remove selenium from Big Canyon Creek during dry weather.

Because this green solution was implemented at a significantly lower cost than other treatment approaches, the city was able to restore six acres of degraded habitat along the creek to natural conditions, which also contributed to improved water quality. Additionally, the project connected the restored area to a larger trail system to enhance recreational opportunities and promote environmental stewardship.

Burns & McDonnell’s innovative solution provided Newport Beach the affordable solution to its selenium pollution problem that had long eluded it — and much more.

For photos and support materials, visit our MEDIA KIT.

About Burns & McDonnell
Burns & McDonnell is a family of companies made up of more than 6,000 engineers, architects, construction professionals, scientists, consultants and entrepreneurs with offices across the country and throughout the world. We strive to create amazing success for our clients and amazing careers for our employee-owners. Burns & McDonnell is 100 percent employee-owned and is proud to be on Fortune’s 2018 list of 100 Best Companies to Work For. For more information, visit burnsmcd.com.