VTT Technical Research Centre of Finland (VTT) and Metropolia University of Applied Sciences are partnering for opportunities on Solar. They want to extend integrating visually attractive solar modules. These modules built into architecture of building facades. Also, theY insist on a commercialization routes based on the circular economy.

VTT has developed a mass production method. Based on printing technologies they manufacture patterned organic solar modules. The method enables freely customised solar modules. This meets architectural requirements of buildings. In addition, they add value to their visual appearance and generate energy.

First off, Organic solar modules can form even visually attractive multicolored graphical images. Thinness and flexibility allows the solar modules being integrated in glasses or being adjusted to conform on a freeform surface in building facades. As well, the solar modules also serve as intelligent interior surfaces. They collect energy from indoor lighting too. Thereby lighting devices such as sensors. Sensors that gather information from the surrounding environment. This is as part of internet of things applications. 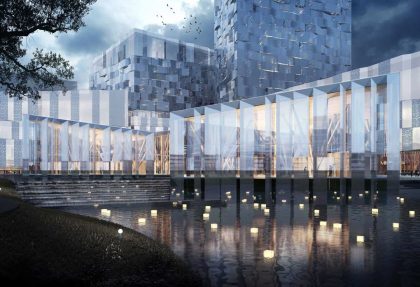 PES Architects is one of the project partners. PES designed innovative building façade concept. Concepts where solar modules are symbolizing ice crystals through Chinese calligraphy. Therefore, integrating design into the modules brought into glass facades. This concept was winning proposal in design competitions of the Sino-Finnish Congress Centre in Nanjing, China. It also received the Special Award for Innovation of the Architectural Review MIPIM Future Project.

“Due to energy efficiency requirements, solar shading solutions will be an essential element of building in the future. Combined with collecting energy from sunlight, this will take us very far along the road to energy-efficient construction,” says Jarno Ahtonen, CEO of Artic Kaihdin Oy.

In addition, using coated materials on flexible and rigid surfaces.  Coupled with exploring together with Optitune Oy. That’ll improve the usability and maximize performance.

“Optical performance, protection against abrasion and impurities are essential properties to guarantee the long-term efficiency of the solar modules,” says Ari Kärkkäinen, CTO of Optitune Oy.