As some of you may know, the Liberty Science Center, an interactive science museum and learning center. Located in Liberty State Park in Jersey City, New Jersey. Therefore the center, which first opened in 1993 as New Jersey’s first major state science museum has science exhibits. Also many educational resources, and the largest IMAX Dome theater in the United States. Liberty Science Center is also home to the original Hoberman Sphere. It’s a silver, computer-driven engineering artwork designed by Chuck Hoberman. Chuck is a famous inventor of folding toys and structures. 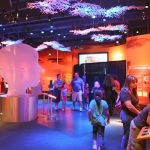 Among the lights replaced, 1,500 energy-wasting 90-Watt incandescent PAR38 bulbs. In its’ place! Can you say 1,500 Cree LRP-38™ LED spotlights. Likewise it’s specifically designed for displays in museum environments. Many of the exhibits are now lit with 12 Watt LRP-38 LED lights.

So my goodness they consume much less energy while delivering great light. The LRP-38 is also designed to last 50,000 hours and produces little heat, saving on air conditioning needs and related costs, and emits almost no ultraviolet rays, which can help protect priceless objects featured in the museum.

In all, officials at the science center estimate that the museum will see its energy consumption reduced by nearly 625,000 kilowatt-hours each year and nearly $120,000 per year in energy and maintenance costs.