JERSEY CITY – Mayor Steven M. Fulop announces Jersey Cityhas been awarded more than $2 million by the New Jersey Department of Environmental Protection (DEP) to purchase five new electric garbage trucks.  The new clean energy trucks will be the first of its kind in Jersey City, and are the latest addition to the City’s energy efficient municipal fleet.

Clearly they are leading the State. Thats by establishing the necessary infrastructure for clean transportation in Jersey City. This will surely bolster our efforts.

Mayor Steven Fulop added the following comments. “We all play a significant role in the battle against climate change. That’s today by replacing our 30-year-old diesel garbage trucks. That’s with zero-emission vehicles will significantly improve air quality citywide. We are continually looking for ways to become a more environmentally-conscious City. Thereby ultimately increasing quality of life with cleaner, healthier air.” 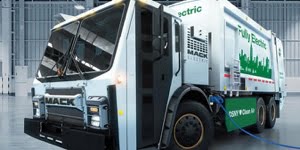 Jersey City’s proposal to replace 5 diesel garbage trucks with all electric trucks. For it was selected amongst more than 150 project proposals submitted to the DEP.  The award is part of the state’s $72.2 million share of federal settlements. For that’s following a lawsuit against Volkswagen for recording fraudulent emission levels in their diesel vehicles.

“Garbage trucks are the highest polluting vehicles in most municipal fleets. They also run their routes down every street.  Thereby spewing emissions throughout neighborhoods,” said Brian Platt, Jersey City’s Business Administrator.  “This grant encompasses a number of aims as this week we are also installing solar panels at our DPW building and we will start to add charging stations throughout the city for municipal and public use.”

According to the DEP, transportation sector emissions account for 71 percent of nitrogen oxide emissions, as well as 42 percent of greenhouse-gas emissions in New Jersey. In distributing the second round of funding, the DEP focused on promoting electrification to replace heavy-duty vehicles in overburdened communities. Of the $16 million disbursed in the second round of funding, the City will receive $2,046,000 in total for the new vehicles. Other projects awarded include school buses and port-related vehicles.

Other Environmentally Friendly Initiatives Happening in Jersey City this Month:

Jersey City continues to lead the state in many progressive sustainability initiatives. New public charging stations are being installed at City Hall, the Annex and the Department of Public Works starting this week. The charging stations will not only power the new garbage trucks, but will also be available for public use.

Jersey City not only implemented a new car sharing initiative to help reduce the size of the fleet as a whole. However it also added electric vehicles to be shared by City employees. Especially to further boost clean transportation efforts.

This month solar panels are being installed at the Department of Public Works. That which will provide electricity to the building. As well as the new charging stations.

Later this month, the City will also implement a ban on plastic bags. Also working with local businesses on alternative solutions.