Going green is becoming part of popular culture. Making small changes is also seeing a growing popularity; more and more people are changing their light bulbs for high efficiency alternatives or using cloth grocery bags. But often times the biggest cause of pollution and harm to our environment is so big and obvious we look right past it: our cars.

Most people don’t realize the history of the electric car dates back as far as 1828. Since that date, the popularity has risen and fallen several times. The 1990’s saw a huge explosion in the popularity of electric and hybrid vehicles. In 1997 Toyota unveiled the first commercially mass-produced hybrid car, the Prius, still one of the most popular hybrid cars on the road.

Since then, manufacturers have waged a war between holding on to the time tested methods of the past and the uncertain innovations of the future. Politics and finances kept new developments and breakthroughs few and far between until a small California based company shook the world by producing the all-electric highway-capable Tesla Roadster.

Today’s electric vehicles are much more advanced than their earlier counterparts. Many advances in technology have resulted in longer battery life and greater range. The Nissan Leaf boasts one of the longest ranges and, for extended trips, charging stations are becoming more popular in most cities. For those who like power and style, never fear. Models like the Tesla X accelerate from 0 to 60 in under 5 seconds and sport the incredible Falcon Wing doors.

For those of you not yet ready to take the leap into the electric or hybrid vehicle world, you can still help the environment and reduce your carbon footprint. The first step — knowledge and awareness — is easy. Changing a few little things in your driving habits can make a huge impact on your fuel efficiency and the amount of pollution your car produces.

It never hurts to go back to the basics. Many states have incorporated responsible driving right into their laws. New drivers (and old) can benefit by studying up on state laws with easy-to-use free study websites like Driving-tests.org.

Beyond that, there are several ways to increase fuel efficiency in your everyday commute:

For those wondering what the future looks like, it’s pretty amazing. Solar Roadways is busy developing solar panels that will replace asphalt and concrete on our roadways. Aside from the obvious power generation solution, they are also safer, snow and ice resistant, and can help with traffic delays. When coupled with concepts like Hevo Power’s wireless car battery chargers, maybe one day we will see roads that power your car while you drive, not to mention emission and pollution free. 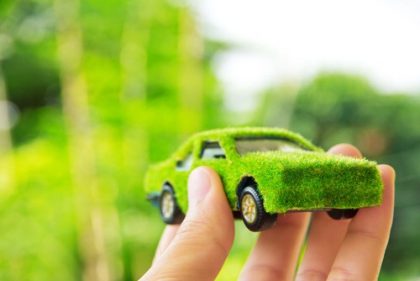