According to the National Climate Assessment which global climate change forecast from our US Government. It measures the intensity, frequency, and duration of North Atlantic hurricanes. That’s as well as the frequency of the strongest hurricanes. They have all increased since the early 1980s. Also hurricane intensity and rainfall are projected to increase. More over and certainly as the climate continues to warm.

As I read the report it noted in the past that natural things created climate changes.  Today, however, the picture is very different. Although natural factors still affect climate. It reads human activities are now the primary cause of the current warming. So specifically, human activities that increase atmospheric levels of carbon dioxide (CO2) and other heat-trapping gases. As well as various particles. All that and depending on the type of particle, can have either a heating or cooling influence on the atmosphere.

According to Climate.Gov, temperatures across the tropical Pacific were above average in November. However sub-surface heat content was near normal as were surface winds. Of the three possible outcomes. The return of El Niño, La Niña, or neutral. Yet forecasters continue to give neutral the highest odds (70% chance) of continuing through winter.

The El Niño / Southern Oscillation (ENSO) is the Earth’s dominant mode of climate variability on seasonal to interannual time scales. El Niño or ENSO is a year-to-year fluctuation of sea surface temperatures (SSTs). That’s rainfall, winds, and currents over the tropical Pacific Ocean. All which affects weather, economies, and ecosystems worldwide. So research to better understand and predict ENSO and other seasonal-to-interannual climate variations is ongoing. All including their responses to global warming. Our scientists are engaged in a vigorous effort to understand and simulate ENSO, to forecast its effects on seasonal-to-interannual time scales, and to predict how its impacts may change over the coming decades.

PDI is an aggregate measure of Atlantic hurricane activity. It’s also combining frequency, intensity, and duration of hurricanes. All in a single index. Both Atlantic SSTs and PDI have risen sharply. Especially since the 1970s. As well as there is some evidence that PDI levels in recent years are higher. Yes folks; higher than in the previous active Atlantic hurricane era. That era is in the 1950s and 60s.

Therefore the implications are sobering. I mean the large increases in tropical Atlantic SSTs projected for the late 21st century would imply very substantial increases in hurricanes. Let’s say those that are destructive potential. Can we say roughly a 300% increase in the PDI by 2100 (Figure 1a). 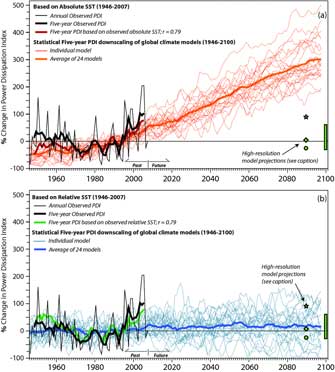 On the other hand, Swanson (2008) and others noted that Atlantic hurricane power dissipation is also well-correlated with other SST indices besides tropical Atlantic SST alone.

Now and in particular with indices of Atlantic SST relative to tropical mean SST (e.g., Figure 1b from Vecchi et al. 2008). This is in fact a crucial distinction. That’s because while the statistical relationship between Atlantic hurricanes and local Atlantic SST shown in the upper panel of Figure 1 would imply a very large increases in Atlantic hurricane activity (PDI). All due to 21st century greenhouse warming.

Therefore folks the alternative statistical relationship Figure 1 shows Atlantic hurricane activity (PDI) with greenhouse warming. In the latter case, the alternative relative SST measure in the lower panel does not change very much over the 21st century. That’s even with substantial Atlantic warming projections. All from climate models, because the warming projected for the tropical Atlantic in the models is not very different. I mean from that projected for the tropics as a whole.

Hey. We are closed but please message. We are open.