A poll stated a few years ago that 72 percent of businesses polled. It had implemented or planned to start a BYOD (Bring Your Own Device) policy in the workplace. While this can cause concern about security, only six percent of organizations reported any kind of “information leakage”.

All due to devices in the workplace. So in spite of concerns, the BYOD movement has brought about many benefits. As expected, when employees bring their own laptop, tablet or smart phone with them to use in the workplace, employer costs drop definitely! Especially in areas like hardware, software and upgrading expenses.

Additionally, employees report a higher degree of work satisfaction under BYOD policies. Less anticipated, though, are the many eco-friendly benefits that a BYOD policy can bring to an organization:

Laptop computers, smartphones and tablets consume 80 percent less than their power-cord-tethered uncle. Aka the desktop PC. So these mobile devices use less of the energy a PC requires to run.  As well they also charge quickly and can run on an average 24 hours. Operate all without requiring to power up again. 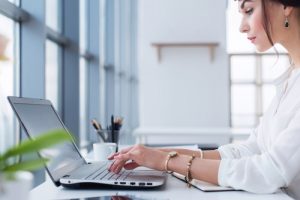 Reduce Use of Resources Needed to Create New PCs

A typical personal desktop computer requires almost two tons of raw material, which is similar to the amount needed to produce a small car. Additionally, the PC uses about 240 kilograms of fossil fuels, which is much more than was needed producing mobile tech.

Since most modern organizations are more often making use of cloud storage solutions, files no longer need to be printed when all employees have access to them in the cloud, negating the need for paper copies and allowing employees to unchain themselves from a stationary workstation where they have to wait for documents to print.

When employees bring their own devices to work, they tend to take better care of them. Better than they would company property. Aka something that does not belong to them. All with frequent updates available for smartphones, laptops and tablets. Therefore if properly maintained, the lifespan of such devices can rival that of the PC. In implementing a BYOD policy, the work philosophy becomes one of “reuse,” so employees encouraged to work with what they have. In some cases, when one employee upgrades to a newer tech device, he or she will offer to sell the older device to a co-worker, making the most of available tech before it becomes outdated.

Recycling incentives naturally compliment a BYOD workplace. With a reuse mentality, employees will likely form better recycling habits. Though an owner is unable to dictate what employees do with their own devices when the time comes for a new one, a reward system could be put in place to encourage the recycling of old devices. Leaders can also encourage staff to opt for tech that’s conducive to recycling, like Apple’s iPhone 7. Apple has removed toxins from its devices to make them more environmentally friendly. They additionally developed a robot called Liam, specially designed to disassemble iPhones and sort materials for reuse. And since the United States Environmental Protection Agency (EPA) reports that 75 pounds of gold, 772 pounds of silver and more than 30,000 pounds of copper recovered for every million cellphones recycled, those devices yield substantial recycling results.

In conclusion, though m some concerns about BYOD policies remain. For example, the benefits of allowing employees to bring and work from their own devices in the workplace. That’ll continue to add. And when a work stratagem saves employers money. It then boosts employee satisfaction and benefits the environment. Thereby it becomes less of a policy and more of a way of life.