Levi Strauss & Co. (LS&Co.) announced it has saved 1 billion liters of water since 2011 through its Water Green Business Approach to work. You see they saw all the green in green business.

A study shows 3,800 liters of water used throughout the lifetime of a pair of jeans.

The new report expands on previous research. All to better understand the impact of cotton cultivation. Therefore it also includes data from the world’s primary cotton producing countries. They are including:
1. United States
2. China
3. Brazil
4. India
5. Pakistan
6. UK
7. Australia

To reduce the impact of cotton consumption, LS&Co. is working with the Better Cotton Initiative® (BCI) to train farmers to grow cotton using less water. Based on the latest BCI harvest data available, in 2013, cotton farmers in China reduced their water use by 23 percent compared with farmers who were not using BCI techniques. LS&Co. plans to continue working with its global suppliers with the goal of sourcing approximately 75 percent Better Cotton by 2020, up from 6 percent today.

Levi Strauss &Co. will also continue to work toward using less water during manufacturing by expanding the Water

“It’s time to rethink autopilot behaviors like washing your jeans after every wear because in many cases it’s simply not necessary,” said Chip Bergh, CEO and president of Levi Strauss &Co. “Our findings have pushed us as a company to rethink how we make our jeans, and we’re proud that our water stewardship actions to date have saved 1 billion liters of water. By engaging and educating consumers, we can fundamentally change the environmental impact of apparel and, ideally, how consumers think about the clothes they wear every day.”

Based on the study’s findings, consumers responsible for 23 percent of the water used in the lifecycle of a pair of jeans. So therefore LS&Co. is launching a new consumer education campaign. One to ensure consumers understand their environmental impact. By taking the “Are You Ready to Come Clean?” quiz* on www.levi.com/progress, consumers around the world will be able to find out how much water and energy they use compared with average consumers.

One can rate consumers in the U.S., the U.K., France and China. Every year, between World Water Day (March 22) and Earth Day (April 22). So consumers are encouraged to take a pledge to wash their jeans less often.

This latest update builds on findings from the assessment LS&Co. conducted in 2007, which led the company to launch Care Tag for the Planet, sewing tags into every LS&Co. product to encourage consumers to adopt care methods that use less energy and water. Innovating around water reduction in denim manufacturing led to the creation of the Water THE LIFECYCLE OF A PAIR OF LEVI’S® 501® JEANS — SUMMARY OF KEY FINDINGS

Water Consumption: Nearly 3,800 liters of water are used to make a pair of jeans. Fiber production, predominantly cotton (68%), consumes the most water, followed by consumer care (23%).
Climate Change: Of the 33.4 kg of carbon dioxide produced during the lifecycle of a pair of jeans, consumer care (37%) and fabric production (27%) generate the most significant climate change impact and energy use.
Expanded Scope: By expanding our scope to include leading cotton-producing countries, we’ve seen the water consumption from cotton cultivation increase, since the amount of water used to grow cotton varies significantly across the world. Also, by including new consumer markets we’ve found that washing and drying habits vary by region.

Impact: By wearing jeans 10 times before washing, American consumers can reduce their water and climate change impact by 77 percent, U.K. and French consumers by 75 percent and Chinese consumers by 61 percent. 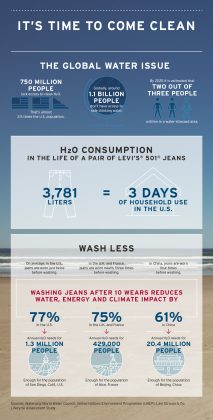 U.S. consumers typically wear their jeans 2 times before washing them.

Whereas in the U.K. and France, consumers typically wear their jeans 2.5 times before washing them.

So consumer jeans-washing habits vary by region:
Americans use more water and energy to wash and dry their jeans than consumers in the other markets.

Consequently consumers in the U.K. and France mostly air dry their jeans. That’s as well using more hot water than others.

Source: SAN FRANCISCO (March 17, 2015) –You can learn more about the latest LS&Co.’s sustainability efforts on http://www.levistrauss.com. Information can also be found at http://www.levi.com/progress.