As I wrote on Huffington Post for their review

The BMW X1 is a more sturdy and fuel efficient SUV on its’ own. It makes for the confusing question why not plugin hybrid?

However, if this is the start for this SUV, we are all in for something special. For this vehicle since it IS a mild hybrid electric SUV. Given the Driving Dynamics Control was included with the ECO PRO, COMFORT, and SPORT settings. However most of the test drive results were in ECO PRO and SPORT on highway for maximum MPG. 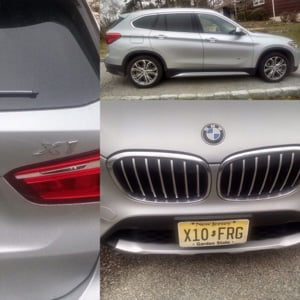 So first of all, the new BMW X1 – the successor to the model that blazed the trail for this class of car. However it treats the premium compact segment to an even more potent shot. That’s of Sports Activity Vehicle DNA. That’s because the second generation of this successful model is more than 730,000 units sold. All which have now been sold, takes to the stage with a body design straight out of the BMW X model mold.

The interior of the new BMW X1, meanwhile, offers significantly more space for passengers and luggage, a cutting-edge premium ambience and functionality grounded in solid engineering.

As well as the four-cylinder engines from the BMW Group’s latest generation of power units, an efficiency-optimized version of the BMW xDrive intelligent all-wheel-drive system. Also and a newly developed chassis technology. Thereby all help to palpably enhance sporting ability and ride comfort compared to the outgoing model. That’s with fuel consumption and emissions reduced by up to 17 per cent, model-on-model.  That means In AMERICAN Green Living Guy MPG terms of 30-35 on the highway in ECO mode!

However as Motor1 mentioned about the X1 plugin hybrid.

Set to be introduced later this year, the plug-in hybrid variant follows in the footsteps of the standard model but features a charging port which is located on the driver’s side front fender.  There doesn’t appear to be any other changes but the production model should feature special badging and a modestly revised interior with hybrid-specific displays.

Power will be provided by a plug-in hybrid powertrain that consists of a 1.5-liter TwinPower Turbo three-cylinder engine, an electric motor, and a 7.7 kilowatt hour lithium-ion battery pack.  The engine will power the front wheels, while the electric motor will motivate the rear wheels.  This will allow the model to be front-wheel drive, rear-wheel drive, or all-wheel drive. All when the two powertrains are working together.

Tips on X1 Plug-in Hybrid Sales once they launch.

While the BMW X1 may be maligned by enthusiasts, it’s actually a car the we like quite a bit. Sure, it’s front-wheel drive-based and that angers teeth-gnashing fanboys who want rear-wheel drive or nothing. However, a quick drive in the X1 will reveal its charms and prove that it’s the best small crossover in its class. It convinced this typically hard-headed BMW fan and if it can convince me (Italians are famously and unnaturally stubborn), then it must be good. But don’t take it from just me, ask. Car and Driver.

In conclusion, and in their recent in-depth review. All where they review every single aspect of the car. Also and give each one a 1-5 start rating. They gave the X1 high praise. For example, C&D rates each car in terms of exterior. Also, interior, engine and transmission. In addition, performance and handling, fuel economy and cargo space.  Finally, and of course technology; among other things.

So each of these categories gets a different rating and then it’s all averaged out. When done with the BMW X1, it ranked ahead of all of its competitors.