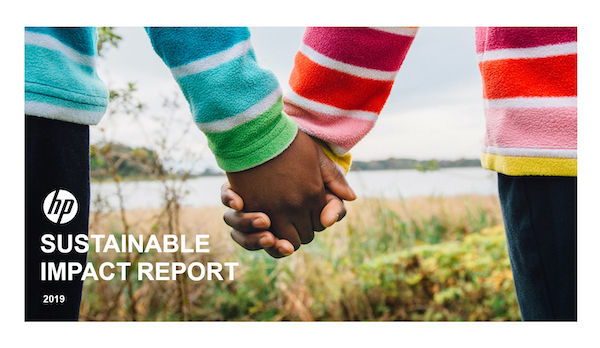 Sustainable Impact is HP’s commitment to create positive, lasting change for the planet. That’s for its people and our communities.

HP meets this commitment through the actions of its employees. Also the technologies it designs. Moreover the partnerships it forms. Helping to expand the reach of HP solutions to address global challenges.

The 2019 HP Sustainable Impact Report and Executive Summary highlight the actions the company is taking to address some of the world’s most critical social and environmental challenges. It outlines the HP Sustainable Impact strategy and the key accomplishments achieved in the previous year, and looks ahead to the future that HP aims to create.

The report provides information on the company’s goals and progress to date. HP knows that making a sustainable impact is not just the right thing to do. It also serves as a key differentiator for customers and investors. All moreover who are rewarding companies with purpose-driven cultures.

Those companies that focus on creating long-term value inside and outside their walls. In fact, in fiscal year 2019 alone, HP won more than $1.6 billion in new sales. Yes folks and due, in part, to its sustainability efforts. That’s moreover than an estimated 69 percent increase. All from the previous year.

Among the progress and commitments HP highlighted in the 2019 HP Sustainable Impact Report are:Announced a goal to eliminate 75 percent of single-use plastic packaging by 2025, compared with 2018.

Announced a new goal to double the number of Black and African American executives inside the company by 2025.

Continued to have the most diverse Board of Directors of any U.S. technology company, and in 2019, made progress toward its diversity imperative: 63 percent of HP U.S. hires were from underrepresented groups, including women, U.S. ethnicities, veterans, and persons with disabilities (compared to 57 percent in 2018).

Contributed $698 million in overall economic impact through its supplier diversity program, including goods and services produced by HP’s diverse suppliers and their supply chains.

Through 2019, reached more than 28 million people through its educational programs. In addition to products and partnerships. Those were all in support of the company’s goal to enable better learning outcomes. All for 100 million people by 2025.

Reached $35.17 million in HP Foundation and employee community giving toward its goal to contribute $100 million by 2025 (cumulative since the beginning of 2016).

In conclusion and to learn more about HP’s goals. As well as it’s progress and vision for the future. Moreover as the company continues to shift its business model and operations. All to advance a more circular, low-carbon, and inclusive economy at http://hp.com/sustainableimpact.