First of all, the Center for International Environmental Law (CIEL) reporting that amidst growing concern about the impacts of plastic on the oceans and especially microplastics. All on ecosystems, and human health, there’s another largely hidden dimension of the plastic crisis. It’s clearly plastic’s contribution to global greenhouse gas emissions and climate change. This report examines each of these stages of the plastic lifecycle to identify the major sources of greenhouse gas emissions, sources of uncounted emissions, and uncertainties that likely lead to underestimation of plastic’s climate impacts.

The report comparing greenhouse gas emissions estimates against global carbon budgets and emissions commitments. It also considers how current trends and projections will impact our ability to reach agreed emissions targets. Finally it compiles data. For example, downstream emissions and future growth rates. Those that have not previously been accounted for in widely used climate models. Because this accounting paints a grim picture. I mean plastic proliferation threatens our planet and the climate at a global scale.

As CBS News Reports: An American diver broke the record for deepest submarine dive ever and found something disheartening at the bottom of the ocean. It was consequently a plastic bag. Victor Vescovo traveled seven miles down to the deepest part of the ocean. Located in the Mariana Trench of the Pacific, BBC News reports.

So during his four-hour excursion, Vescovo spotted new sea creatures. That’s as well as a plastic bag and candy wrappers. The dive was recorded for “Deep Planet,” a series that will air on Discovery Channel later this year.

His team believing they discovered four new prawn-like species in total. They also saw a spoon worm, a pink snailfish and a colored rocky outcrops. Thereby all inhabitants of the deep sea. In addition to the creatures, they discovered something that past expeditions have not: pollution. Humanity’s impact had reached the deepest parts of the sea floor; the team realized.

Even recently The Huffington Post reported that there are so many dead whales are washing up on the West Coast. All to the point that NOAA Is pleading for help. So yes folks! I mean the federal agency is also calling on property owners to volunteer space.
Especially where a mounting toll of dead whales are decomposing naturally.

Local organizations have struggled to dispose of 70 dead gray whales. Whales that have washed up along America’s West Coast. Now, a federal agency is turning to private property owners for help.

The tragic die-off is the highest in 20 years. Scientists believe most of the massive animals are starving to death and speculate that it’s because food sources are vanishing in the dramatically warmer waters triggered by climate change.

Then NPR reports further about microplastics. Surprisingly high amounts of microplastic are raining down on a remote and seemingly pristine part of France’s Pyrenees mountains, according to scientists who say such particles could potentially be floating everywhere.

Microplastic are fragments smaller than a fifth of an inch. So small that they have broken down from larger pieces of plastic. These have been found in rivers, lakes, the oceans and in agricultural soil. But very few studies of wind-borne microplastic have ever been done. This one found that the air over these mountains has about as much floating plastic pollution as the air over Paris or Dongguan. Dongguan is consequently a large industrial city in China.

Steve Allen is a researcher at the University of Strathclyde in Scotland. He was part of the team that dreamed up the Pyrenees experiment.

“I don’t know if you’ve ever seen a plastic bag on a fence flapping away until it disappears,” he says. “Well, we thought that maybe it just doesn’t disappear, so we started looking for it a bit higher up.”

Higher up meaning 4,500 feet up a mountain. Allen’s team set up collectors there for five months to trap plastic particles as they fell to Earth. “We expected to find some,” Allen says. “We didn’t expect to find quite as much as we did.”

In fact, they found 365 plastic particles on average every day on a square meter collector. “We’d kind of expected it in a city getting blown around,” he says, “but way up there? The number is astounding.”

Writing in the journal found several types of microplastic floating on the wind in the Pyrenees: fibers from clothing, and bits from plastic bags, plastic film and packaging material. 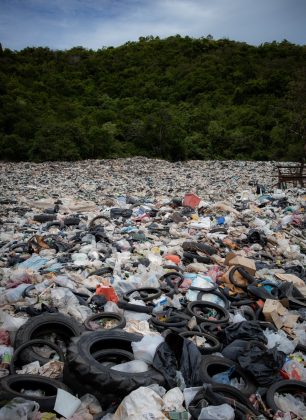 Furthermore National Geographic reports: Trillions of cigarette butts are thrown into the environment every year, where they leach nicotine and heavy metals before turning into microplastic pollution.

SMOKERS AROUND THE world buy roughly 6.5 trillion cigarettes each year. That’s 18 billion every day. While most of a cigarette’s innards and paper wrapping disintegrate when smoked, not everything gets burned. Trillions of cigarette filters—also known as butts or ends—are left over, only an estimated third of which make it into the trash. The rest are casually flung into the street or out a window.

Cigarette filters are made of a plastic called cellulose acetate. When tossed into the environment, they dump not only that plastic, but also the nicotine, heavy metals, and many other chemicals they’ve absorbed into the surrounding environment.

In addition, the Huffington Post reported Utah officials havedetermined that more than 30 deer found near a landfill in northeastern Utah died from starvation, diseases and other causes.

The Division of Wildlife Resources said Friday said officials found plastic bags and latex gloves in some of the deers’ remains but say the main culprit for their deaths was a harsh winter.

Officials learned of the dead deer after hikers shared photos of them strewn across a road near the landfill in the small city of Coalville.

Hadley said officials are working to craft a plan to help prevent deer from getting into the landfill.

Finally and from the USEPA:

After 30 years of tracking MSW, the report has been expanded to include additional information on source reduction (waste prevention) of MSW, information on historical landfill tipping fees for MSW, and information on construction and demolition debris generation, which is outside of the scope of MSW.

The new name also emphasizes the importance of sustainable materials management (SMM). SMM refers to the use and reuse of materials in the most productive and sustainable ways across their entire life cycle. SMM practices conserve resources, reduce wastes, slow climate change and minimize the environmental impacts of the materials we use.

In 2013, Americans generated about 254 million tons of trash and recycled and composted about 87 million tons of this material. That’s equivalent to a 34.3 percent recycling rate. So about 63.7 percent is not recycled. We have a lot of work to do folks. A lot.

In conclusion CNN adds: Every day we are ingesting tiny, often microscopic pieces of plastic — “microplastics” — with our food, beverages and with the very air we breathe.

Americans eat, drink and breathe between 74,000 and 121,000 microplastic particles each year depending on their age and sex, new research suggests.

Those who exclusively drink bottled water rather than tap water can add up to 90,000 plastic particles to their estimated annual total, according to the published Wednesday in the journal Environmental Science & Technology.