Environmental Center is 1ST municipal building from Pittsburgh Parks Conservancy. This is free and open to the public. First one certified in the country. One of only 21 buildings worldwide

After more than a year of extensive sustainability work, the launch has commenced. The shared project between the Pittsburgh Parks Conservancy and the City of Pittsburgh, received the Living Building Challenge (LBC) Certification. The world’s most rigorous proven performance standard by the International Living Future Institute. The Frick Environmental Center is the first Living Building in America that’s municipally owned. So it’s free and open to the public. To qualify, the Environmental Center must produce as much energy as it consumes annually. It also must end toxic and harmful chemicals, and collect and treat its own water.

The nonprofit Pittsburgh Parks Conservancy partnered with many. Some include the City of Pittsburgh, architect Bohlin Cywinski Jackson, landscape architect LaQuatra Bonci Associates, and construction manager P.J. Dick Incorporated to make this “net zero” energy and water facility a reality. 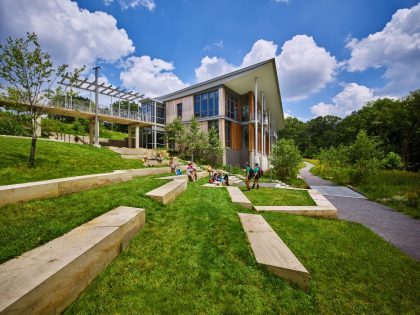 Most noteworthy, No building in western Pennsylvania has ever been built according to such rigorous performance standards. That quote came from PJ Dick Project Manager Noah Shalter.