Renewable energy continues to become more popular across the United States, with wind power production nearly tripling since 2011. So solar power production is multiplying by 23 times in the same time period.

The numerous benefits of solar include versatility and greater control over energy consumption. As well as the added perk of helping the environment. Though solar power can be costly to install, its prices continue to fall, and it earns its cost back through later savings.

Because solar power is growing so rapidly in the U.S., nearly any location in the country would be great for starting your own journey with solar power. However, if you would like to live in one of the states doing the most to promote solar power use, check out the lists below!

In 2021, 4% of all United States electricity came from solar energy. The 10 states that have generated the most solar power through Q3 2021 are:

California, ahead at almost triple the amount of available solar power of the state in second place, is able to power 9,591,857 homes with its current solar capacity. However, even the lowest state on the list, Georgia, is able to power 415,941 homes.

Texas is furthest in the lead with the installation of 4,523 MW. The next closest is California, which installed 1,899 MW. If you want to relocate to a state growing its solar capabilities the fastest, Texas is your best choice. However, all the states on this list are growing quickly compared to 10 years ago.

Not every state could make the top 10 list, and several states appeared on both lists. That means most states in the U.S. have the opportunity to greatly improve their solar capabilities. Indeed, even the states currently in the lead still have room to improve. For example, solar power only makes up about 24% of California’s electricity production. 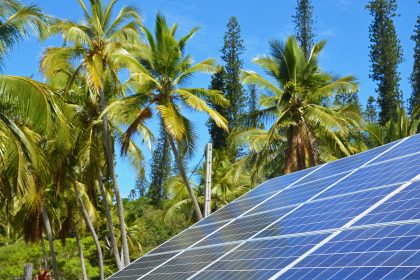 Moreover, states across the country are setting incentives and benefits for solar installation. That encourages businesses and citizens to embrace solar energy. Here are some of the best ways states are promoting solar power:

Solar power is continuing to grow – not just in Texas and California, but in every state across the country. Even the states that currently have the least growth, like Alabama, North and South Dakota, and Tennessee, are implementing new incentives and goals to boost their clean energy contributions.

The United States still has a long way to go before the country itself reaches 100% clean energy, but every state that achieves its own goals pulls the entire country closer and closer to that target.