BMW will debut a new 60-second advertisement during the Super Bowl on Sunday, February 13, 2022, to showcase its All-New, fully electric BMW iX Sports Activity Vehicle, which arrives in the US next month. The star-stud spot features legendary actor Arnold Schwarzenegger and Academy Award nominee Salma Hayek Pinault. The director is the two-time Academy Award-nominee, Bryan Buckley. It will air during the third commercial break of the first quarter of the game.

Schwarzenegger stars as Zeus, the Greek god of lightning. Hayek Pinault plays his wife, the goddess Hera, as they retire from Mt. Olympus to a quiet life in Palm Springs, California.  However, the monotony of retirement quickly weighs on Zeus. His frustration grows by his struggles with earthly electronics and his nagging mortal neighbors’ constant requests to charge their electric golf carts and hedge trimmers.

Meanwhile, Hera, the hero of the story, has fully acclimated and is thriving in retirement. In an effort to bring some excitement back into Zeus’s life, she gifts him with an all-electric BMW iX. As a. result, it quickly helps reignite her husband’s electric mojo. The spot closes with the happy couple rocking down the road in their new BMW iX to Eddy Grant’s “Electric Avenue.” At the same time, Zeus uses his electric power to change the traffic lights to green. 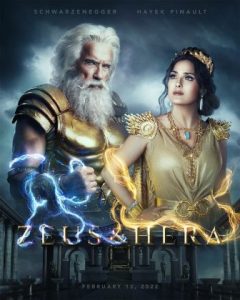 “All-electric mobility is at the very heart of the BMW brand,” said Jens Thiemer, senior vice president, customer and brand, BMW AG. “There is no better place to make this statement than in front of one of the largest television audiences in the world, where viewers tune in as much for the commercials as they do for the game. With Arnold and Salma, we are able to show the world the new BMW iX in a memorable and impactful way.”

“The humor lies in this legendary god of lightning, who is supposed to be indestructible, battling with everyday electronics,” said Schwarzenegger. “It is only when his brilliant wife presents him with the gift of an all-electric BMW iX that Zeus is struck with the mighty power of electricity and is completely rejuvenated.”

The spot was conceived by BMW’s lead U.S. creative agency, Goodby Silverstein & Partners, and directed by two-time Academy Award-nominated director Bryan Buckley, highly acclaimed for his work on more than 65 Super Bowl commercials. The ad also marks Hayek Pinault’s debut in a Super Bowl spot. Not to mention it’s the first time she and Schwarzenegger co-star in a national ad.

“This is my first Super Bowl commercial—and the first time I’ve played a Greek goddess,” said Hayek Pinault. “Seventy-five percent of the decisions made in marriage about where to spend the money are made by women. In this commercial, it is the woman who decides on the right car to get her husband back on track. Of course, the commercial is entertaining, but there is also a real human truth to it.”

“I’ve done 60-some-odd Super Bowl spots. I’ve never had more star power than these two,” said director Bryan Buckley. “When I first saw  Schwarzenegger’s name on the script, I was in. And Salma—there is no one greater as an actress. It’s a movie in 60 seconds, and it’s on the biggest platform.”

Adding to the Superbowl Experience

“Transcending sports, this iconic annual event isn’t just a championship game. It’s a cultural phenomenon where viewers pay even more attention when the action on the field stops,” said Rich Silverstein, co-founder, and co-chairman of Goodby Silverstein & Partners. “There’s only one person on the planet who could say he’s Zeus, and that’s Arnold. And there’s only one brand worthy of being the Ultimate Electric Driving Machine, and that’s BMW. We needed to showcase this in a big way, and that is what we’re doing on February 13.”

The BMW iX provides more than just mortal mobility. It brings together the fifth generation of BMW eDrive technology with the company’s latest developments. For example, in the fields of design, connectivity, digital services, and sustainability. With 516 hp and a 0–60 time of only 4.6 seconds, the BMW iX offers an exhilarating driving experience. It also has an EPA estimate of up to 324 miles of all-electric range and the latest in-vehicle technology. For example, 5G connectivity, a sweeping display that unites the 12.3-inch information display with a 14.9-inch central control display. Not to mention the debut of BMW iDrive 8, the company’s latest user-interface system. The BMW iX starts at $83,200 plus $995 destination and handling. 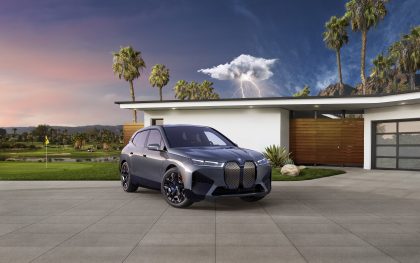 “This is a pinnacle event in the U.S. and the perfect stage on which to introduce the BMW iX to our customers,” said Uwe Dreher, vice president, marketing, BMW of North America. “We have already seen a significant number of preorders for both the BMW iX and BMW i4, and a huge amount of excitement for these two new electric vehicles.”

BMW will also launch the fully electric BMW i4 four-door Gran Coupe in the U.S. next month. It will help the company take a major step toward reaching global sales of 50% electric vehicles by 2030.

BMW’s last Super Bowl ad was in 2015, featuring Katie Couric and Bryant Gumbel. They marveled over BMW’s first fully-electric production vehicle, the BMW i3. The BMW i3 was a pioneer of electromobility. It later became one of the best-selling premium electric vehicles in the world.