NEW BEDFORD, Mass., May 6, 2013 (GLOBE NEWSWIRE) — VECTRIX(TM), a leading global designer and manufacturer of all-electric two-and three wheeled scooters, Vectrix(TM) has been named the European “e-Scooter of the Year” for the third year in a row. CleanWeek 2020 — an all-electric vehicle competition geared to future technologies in the transportation industry. This 4th annual event took place at the famed Belgium racetrack, Circuit Zolder, from May 1 to 3, 2013.

eScooter of the Year

So a jury of 14 European automotive, alternative energy and also motorcycle journalists considered every new e-Scooter released in the past year. Then they also selected the Vectrix VX-1 Li/Li+ as the winner.

In addition, the jury gathered at Circuit Zolder for extensive testing of the electric scooters. Moreover of each model in the competition. Furthermore they was scrutinized and had to pass a series of rigorous testing. All to be named the “e-Scooter of the Year”.

“This is a very meaningful honor for the entire Vectrix team, especially our dedicated and talented designers and engineers,” said Brian Buccella, Vectrix Vice President of Sales and Marketing.

“Electric scooters like the VX-1 Li/Li+ and the VX-2 are the result of incredible commitment and focus. That’s the only method for creating a
great performing electric scooter.” 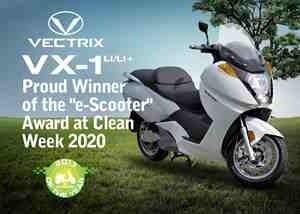