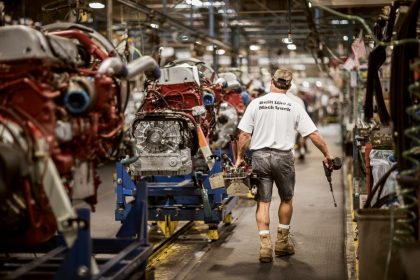 ATLANTA – The U.S. Environmental Protection Agency (EPA) Center for Corporate Climate Leadership announced the third annual Climate Leadership Award winners in partnership with the Association of Climate Change Officers (ACCO), the Center for Climate and Energy Solutions (C2ES) and The Climate Registry (TCR). Nationally, nineteen awards were given to 15 organizations and two individuals in the public and private sectors for their leadership in addressing climate change by reducing carbon pollution.

• Establishing its second goal under EPA’s former Climate Leaders program in 2008 by pledging to achieve a 12 percent intensity reduction (per unit produced) from 2007 to 2012.

• Achieving and exceeding its goal a year early by reducing GHG intensity by 43.2 percent, equivalent to an absolute reduction of 17.4 percent.

Mack Trucks’ current goal was preceded by its first goal achievement—a 32 percent decrease in GHG intensity per unit produced from 2003 to 2007.

The President’s Climate Action Plan calls on the federal government to work with all stakeholders to take action to cut the harmful carbon pollution that fuels climate change. These organizations and individuals are working to do just that.

The awards are held in conjunction with the 2014 Climate Leadership Conference at the Hyatt Mission Bay Hotel in San Diego, Calif.

More information about the 2014 Climate Leadership Award winners is available at www.epa.gov/climateleadership/awards/2014winners.html