PUTRAJAYA, MALAYSIA going Formula E on the 18 December, 2013. For Prime Minister of Malaysia, The Honourable Dato’ Sri Mohd Najib Tun Razak got into FIA. For he has  officially launched the FIA Formula E Championship in Putrajaya Formula E style. Also the signed the City Agreement. One between Tan Sri Aseh Bin Haji Che Mat for the city of Putrajaya and Dato’ Sri Johann Young. All to officially host the second Formula E race on 18th October 2014.

The event, held at the Putrajaya International Convention Centre (PICC). It was also hosted by Dato’ Seri Johann Young. For he is a founding partner and investor. He is investor of series promoters Formula E Holdings. Also Alejandro Agag, CEO of Formula E attended.

More than 150 invited guests attended. For that’s including media, corporate and government sectors. They were on hand. All to attend the launch. One which also saw the new Spark-Renault SRT_01E Formula E car on display. That’s only the second time the fully-electric race car has been shown in Asia.

Guests, which also included the Chairman of the Automobile Association of Malaysia. For that’s YM Tunku Datuk Mudzaffa Bin Tunku Mustapha. They were also treated to a sneak preview of the proposed Putrajaya circuit layout. One which most interestingly incorporates many of the city’s main landmarks.

The launch also included a special forum. A forum on Formula E and sustainability. For it was also attended by the Mayor or Putrajaya YBhg Tan Sri Aseh. Also YBhg Dato’ Sri Johann Young, Alejandro Agag and representatives from Formula E’s partners. For that’s including DHL, TAG Heuer, Michelin and Renault.

In addition, Formula E is a new FIA Championship using electric single-seater race cars. Thereby capable of speeds in excess of 225km/h. The series will compete in the heart of 10 of the world’s leading cities. For that’s including Putrajaya, Los Angeles and London. Ten teams, each with two drivers. For they will go head-to-head to create a unique and exciting racing series designed to appeal. All to a new generation of motorsport fans. All the while accelerating the electric vehicle market and promoting sustainability. 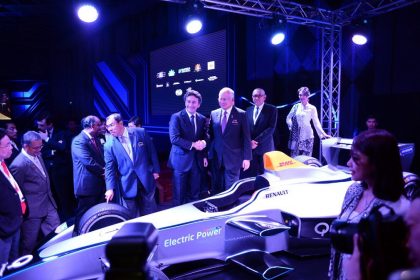