DEARBORN, Mich., Sept. 4, 2014 – The Oakville Assembly plant now sends no operational waste-to-landfill, an achievement that gives Ford Motor Company the distinction of becoming landfill-free at all its manufacturing facilities in Canada. Oakville Assembly is the first Ford assembly plant in North America to achieve this environmental designation.

“Ford is very proud that all its Canadian manufacturing facilities are sending zero waste to landfill,” said Joe Hinrichs, president of the Americas. “We are expanding our manufacturing footprint in Oakville while decreasing our environmental footprint.”

The Essex Engine Plant received landfill-free status in 2012 and Windsor Engine Plant in 2013. A total of 21 Ford facilities around the globe maintain zero waste-to-landfill status. By Ford’s stringent definition this means that those facilities do not send any operational waste to a landfill.
“Reducing waste is a crucial part of our strategy toward building a world-class manufacturing system,” said Anthony Hoskins, director of manufacturing. “We are leveraging the power of our Ford Production System by applying standard waste reduction processes across our facilities.”

In 2013, Oakville Assembly recycled close to 2,000 metric tonnes of wood, cardboard, paper and plastic, saving more than 5,000 cubic metres of landfill space and more than 32 million litres of water. This represents enough landfill space to fulfill the municipal waste disposal needs for a community of more than 5,500 people for one year. The plant even sends its wastewater treatment plant sludge to a power generation company, where it is converted into energy for use back in the community.

“Zero waste-to-landfill is made possible through the support of our entire team and a deep commitment to sustainability throughout our plant,” said Will Cowell, Oakville Assembly plant manager. “Many years of process improvement to reduce, reuse and recycle in every way led to this achievement and we’re just as committed to continuing on this path with the same rigor that brought us here.” 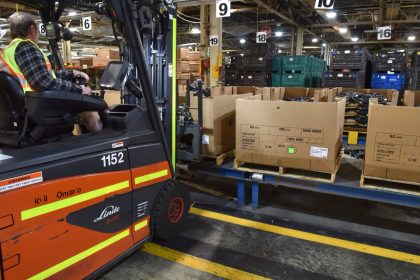