KYOTO, June 13, 2012 — Kyocera Corporation (NYSE:KYO)(TOKYO:6971) along with Toyota Tsusho Corporation and Wakachiku Construction Co., Ltd. announced that the companies are working to install 675kW of Kyocera’s solar power generating systems at schools and other public facilities in the island nation of the Republic of Maldives (also known as the Maldive Islands) located in the Indian Ocean. The Project for Clean Energy Promotion in Malé is being funded by the Japanese government’s Official Development Assistance (ODA) — provided through the Japan International Cooperation Agency (JICA) and the Japan International Cooperation System (JICS) 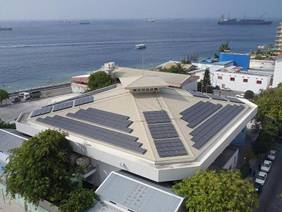 — to promote the utilization of solar energy as an alternate and renewable energy resource and to undertake measures against climate change. 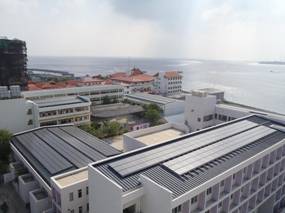 With an average ground level of just roughly 1.5 meters (approx. 5ft) above sea level and the highest natural point of 2.4 meters (approx. 8ft), the archipelago nation is one of the most vulnerable countries on the planet to the impact of rising sea levels caused by climate change, and thus has been at the forefront of advocacy for reducing global emissions of CO2. With the installation of the solar power generating systems, the Maldives is able to take concrete action to reduce its own carbon emissions by off-setting use of fossil fuel with clean renewable energy.

The first phase of the project has been completed, with a total of 395kW of solar power having been installed at five locations which will generate an annual 465,227kWh of power and off-set roughly 146 tons of CO2 per year*.

A second phase has also been decided upon which will see another 280kW installed at five more locations — making the total project the largest installation of solar power in the country.

The project is using Kyocera’s 210-watt module, with 1,896 installed in the first phase and another 1,344 planned for the second phase. Due to the high occurrence of typhoons on the island, the backside of the modules have been reinforced with extra support bars for enhanced wind-pressure resistance.

For more on Kyocera Solar