In the case of the plug-in hybrid model, it’s not just the Carbon Core for the passenger cell but the 2.0-liter gasoline engine with BMW TwinPower Turbo technology and an electric drive unit similar to the i8.  With eight-speed Steptronic transmission, the BMW 740e xDrive will be more efficient than you’d expect.  Since the vehicle is heavier you can expect more torque and weight moving forward which can increase the time a car drives down the road.

The lithium-ion battery pack goes underneath the rear seat; well protected in the event of a crash.

As with the BMW i8, this plugin hybrid can be recharged by connecting to any standard 110 volt outlet or the 200 amp i Wallbox or a public charging station.

The eDrive button on the center console enables the driver to adjust the plugin hybrid drive’s operating mode.

AUTO eDrive basic setting, the engine’s power is boosted to notable effect by the electric drive when accelerating.

MAX eDrive mode the BMW 740e xDrive is able to run purely on electric power, meaning zero local emissions at speeds of up to (75 mph) for a maximum range of 23 miles. Those are good numbers and a little better than the total juice in the batteries for an i8. Would be nice though to get plugin hybrid EV packs to be more like 30 or 40 to start: just saying.

More on this car:

The new 7 Series embodies our quest for modern mobility, the highest quality and absolute precision. Quite simply: driving luxury.

Luxury today is increasingly defined by knowing and feeling that you own something unique.

There have been a lot of media reports recently praising our winning combination of agility and comfort. I particularly like this quote:

Precisely this balance of cutting-edge technology, connectivity and comfort is our vision of modern luxury.

The new BMW 7 Series benefits from BMW i technologies. For a start, the laser lights are derived from the BMW i8 and are now available for the first time in a large-scale series produced vehicle. Another first is the intelligent way in which different materials have been combined in this car. The body has a carbon core. With a much lighter weight, it offers a totally different driving experience, with maximum efficiency. It has never been this easy and comfortable to drive a large luxury sedan. 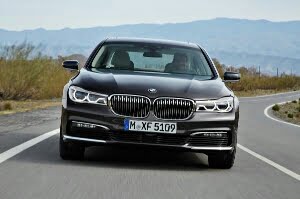 Bottom line I look forward to testing this car. It should have a better mpg than the TDI version tested last time.