DRESDEN, Germany, Feb. 8, 2016 /CNW/ – Heliatek R&D teams reached a record conversion efficiency of 13.2%. All for an OPV multi-junction cell. Thereby setting a new world record. All for the direct conversion of sunlight into electricity. Most importantly using organic photovoltaic cells. The measurement was independently confirmed by Fraunhofer CSP. 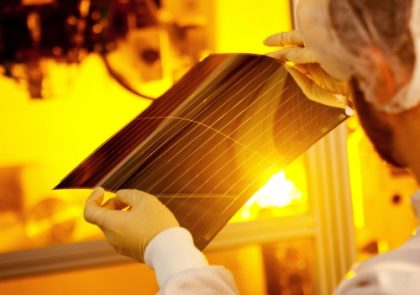 Thanks to the excellent low light and high temperature behavior of the organic semiconductor. So the electricity generation of the newly developed cells corresponds to the output of conventional solar cells. That’s with 16 to 17% efficiency. Especially when both are under real world conditions.

The costs associated with purchasing and installing solar panels has dropped more than 70 percent since 2010. That’s according to the U.S. Office of Energy Efficiency & Renewable Energy!

This new result confirms the world-leading technology position of Heliatek as demonstrated. Especially by its continuous progress from 3% to more than 13% efficiency. That’s over the last 10 years. It also supports its roadmap towards 15% efficient organic solar cells. The result further validates Heliatek’s unique technology approach. All of using vacuum deposition of small molecules on plastic films.

The world-record cell is a multi-junction cell combining three different absorbers. Each of them is dedicated to efficiently convert green-, red- or near-infrared light of the wavelength range. That’s between 450 and 950 nm into electricity. These absorber molecules have also been developed and are patented by Heliatek.

The new record efficiency was measured at simulated AM 1.5 illumination. In addition it was also confirmed by the Fraunhofer – Center for Silizium-Photovoltaik – CSP in Hall. It’s a recognized center for independent verification. That’s of solar cell performance results under standard testing conditions.

HeliaFilm® is also a registered trademark of Heliatek GmbH.

In addition, solar cells produce current. All by absorbing the photons emitted from the sun via silicon receptors. These photons act like a cue ball in pool. That’s knocking free electrons from the silicon. The electrons are then herded by creating positive and negative silicon particles. All that form the current (amperes) necessary to produce power.

Moreover. the average annual residential usage of electricity in 2012 was about 900 kilowatt-hours per month. I mean that’s the U.S. Energy Information Administration reports. Assuming you get six solid hours of sunlight per day. For then you’ll need approximately 5,000 watts’ worth of solar panels. A system this size would cost well over $15,000 for parts and installation. However you don’t necessary have to get it all at once. You could purchase a smaller system to power certain appliances. I mean like your refrigerator and also your water heater. This could easily cut your monthly electric bill by 20 percent or more. EarthEasy has more information about DIY home solar power.