His evidence is compelling.

The movie speaks for itself. The disasters alone do not show climate change or global something affecting our world.

Before the Flood is a three-year journey with Leonardo DiCaprio while he is becoming more aware of the dire situation. 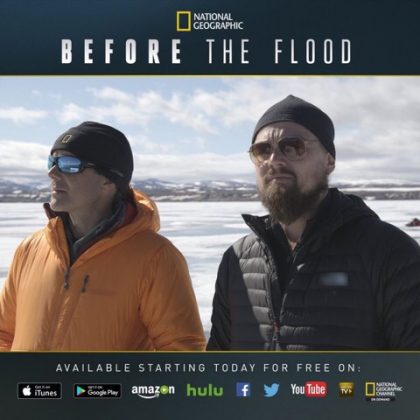 Now while Fisher and DiCaprio are pushing a carbon tax effort through http://www.carbotax.org, I believe it should be voluntary and not force fed to us. If someone wants to make a contribution, let them. President Obama mentioned in the movie during his interview at the White House about technology. The free market with government backup is what has made America Green Again (sorry Nicole Ritchey used that during the recent Environmental Media Association awards) by leaps in technological advancements.

Battery costs on lithium dropped 35 percent in a year according to Bloomberg New Energy Finance.

Before the movie launched, Tesla announced their solar roof with SolarCity. Elon also reported Tesla Motors is profitable, they can deliver their Model 3 orders and do not need additional financing for such. To me that’s a nice one-two combo in the gut of climate change.

So while I do love the movie, I’m not necessarily agreeing to forcing a tax. Whereas a voluntary contribution sounds more palatable and shows that DiCaprio wanted to continue the cause.

My only thing has been the connection to people. Now while drummers always get announced at concerts too, Fisher Stevens has stepped up to shout me out. Big up! He was cool in the interview and I think Stevens can affectuate change if these genre of movies really becomes his new passion. I believe it has become his new move which is why Stevens deserves applause.

Let’s really think about this too. During that three years checking out the world, DiCaprio really realized how bad things are. It took him three years to get that. I mean he knew but you don’t know until you see things. You can talk about things till you are blue in the face my friends Or you can see for yourself. Hopefully He learned. That’s better than those that attack DiCaprio.

So let’s wake up!  Don’t let politics push this movie away. Keep it in your concern. As I stated in my pre game post

Before the Flood was directed by Fisher Stevens (The Cove and my favorite Undefeated) captures a three-year personal journey alongside Academy Award-winning actor and U.N. Messenger of Peace Leonardo DiCaprio.

Throughout Before the Flood is when Leonardo interviews individuals from every facet of society. For that’s in both developing and developed nations. Each person provides their own unique, impassioned and pragmatic views on what must be done today and in the future to prevent catastrophic disruption of life on our planet.