So this fourth, 2017 Green Living Guy Next Breakthrough Model of the Year was decided upon quite earlier than in most years. Frankly because there were also and literally no other choices hands down.

I mean there were other ideas but those people were famous and not Breakthrough. That’s why Theresa Longo is our beautiful, sexy, green, surfer, Italian.  For I mean Miss Italian for North America and one heck of a Model / spokesperson. She also actually speaks out. That’s why she is also the sensational Breakthrough Green Model for 2017.

Theresa’s appetite for green living is so apparent with the surfer girl attitude to life with real direction though. So cool and focused. Then she’s all on no makeup when not in front of a camera. Why? To busy surfing!

Theresa flexes her knowledge of brand development and marketing while pursing a career in the international arts industry from offices in the heart of downtown Toronto. Skilled as a strategic marketing & planning expert, she travels nationally and abroad as a professional actor and corporate Brand Ambassador.

Theresa Longo represented North America on the World Stage at Miss. Italy of the World held in Italy.

What Else Has Theresa Represented?

I love that Theresa supports several charities worldwide; as well as being a teacher to aspiring talent; lecturing on leadership and success derived through the consistent practice of achieving smaller goals with a bigger picture in mind.

Theresa Longo has been around the spotlight.

Let’s be clear, I mean First of ALL!! Theresa loves being green, being vegan and reducing her carbon footprint. She knows not eating beef reduced her overall carbon footprint. Theresa is an organic, vegan, non GMO eating machine who eats real, raw foods as well.

Also, in terms of environment, she’s known for regularly picking up huge bags of plastic and micro plastics on the Pacific Coast of Central America.

TALK ABOUT THE FRONTLINES OF PLASTIC CLEANUP!

GLG So what about your acting creds? Tell me more!

T.L. My demo reel is on IMDB. I memorized a 7 page script to film it in one take for the movie BLUR and it was at cinequest film fest last year.

By the way folks. There’s a clip she did as a waitress in a demo reel. Hilarious work. OMG

GLG: What was the mission like or what is your continued mission for cleanup. I mean you have a place in Costa Rica so what are you doing there to stop our plastic oceans?

T.L. It is so important for us to do our part along the shorelines. My motto is ‘if you see it pick it up,’. Also, ‘if the plastic is extra small, grab it all’. Micro plastics are deadly to animals like birds and fish. Larger plastic items can be deadly for whales. Whales eat by opening up their giant mouths and taking in whatever is floating within that patch of water, fish, plastic, car parts … you name it.

As Theresa also wrote on her blog:

On my last trip to the pacific:

Armed with a giant oversized bag from North America, I began filling it. I concentrated on a 50-100m stretch of beach each pickup. I emptied this bag 3 times after filling it. It would take 1-2 hours. Each day I would pick up the plastic,

I wasn’t getting all of it, but I was significantly reducing the volume that could surely be swept back out. The ocean is a wonderful body of life, it self cleans with it’s rotating gyres, essentially throwing out junk, much of which lands on shorelines (eventually). This bag can be filled 3x per day within a 50-100M stretch of beach. Every day there was always more plastic washing up. It happens every. single. day. >

GLG: So have you done TV too?

Kin comes out later this year, where I did an epic scene with James Franco giving a eulogy in it. I did a guitar solo in a film by Murray Foster and Mike Ford too a couple years ago, called the Cocksurelads about a British Boy Band. 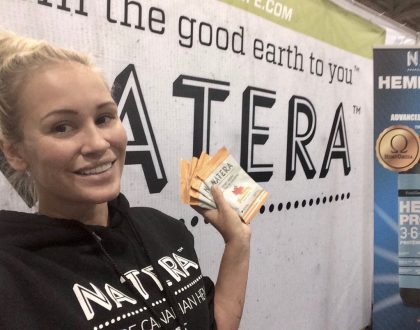 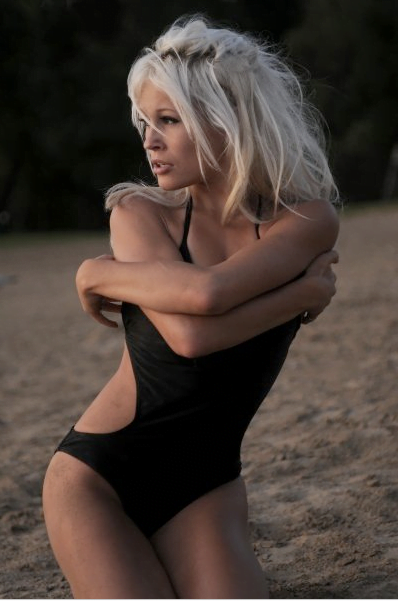 Besides being a model for some big makeup companies, in real life she doesn’t use makeup much. Longo only uses vegan makeup and has worked with some brands like Charlotte Elizabeth Organics,

Theresa also has a YouTube show she does for a company mining for chromite in Northern Ontario; a $60 billion dollar (Canadian) project. They talk about sustainability and she demands to hold these companies accountable to the environment.  It’s an extremely informative video series.

Theresa also works with Natera, a hemp protein company and was recently at the Metro Convention Center Toronto for the CHFA East = Canadian Health Food Association East tradeshow.  She realized around 5 years ago when working closely with NATERA Hemp Protein and Hemp Hearts of it’s health benefits.

Here’s some fast round questions.

GLG What’s your opinion of deforestation?

TL. Terrible! Trees are a breath of life. We shouldn’t cut trees more than 100 years old. Always replace/ replant or save trees!

GLG Where do you see your contribution to the green scene with the Campaign for Safe Cosmetics?

TL. On my website and blog I often write about ethical, chemical free makeup brands. I also recommend these products to anyone who asks. The next step is to continue educating people about vegan make up brands through media and exposure.

GLG Where are you working on these answers as we speak?

T.L. I am loving DeeDee’s organic ice pops!  Deebee’s is a vegan popsicle made of natural fruits. They were the standout ‘pop star’ at the Canadian Health Food Show East tradeshow.

I love when any product can rave about their products but Deebee’s can boast! “We craft our TeaPops and all of our products with real ingredients. No antibiotics, no hormones, no chemicals, no pesticides, no preservatives and no genetically modified ingredients”. AMAZING!

At this point, I want to congratulate Theresa. She deserves the award. Let’s enjoy watching her grow even more into the role of environmental celebrity, intelligent journalist and Green Living Guy 2017 Breakthrough Model. 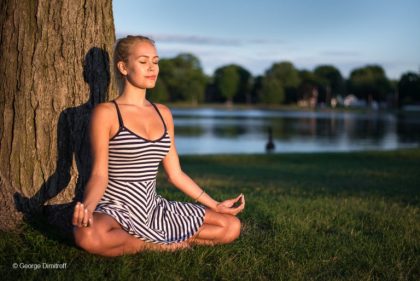 Yet, I always appreciate when someone really affects how to even handle life differently.

Her strong Italian roots also brings a faith in G-d.  I always think we should look to a higher power, so to read that reassured me more.

Theresa’s quote was:   “Worrying is the opposite of trusting G-d – this is why I have no wrinkles on my face. “

Then Theresa wrote to me:

Never worry! 🙂 Life is meant to be happy, for sure.

That’s not just a green Breakthrough Model. It’s one with a heart, a mind and a body! Yet, when you get to know her, you realize Theresa is beautiful.

When I select the awardee, it’s usually like an immediate yes in the heart and mind. It’s just an immediate connection and continued affirmations as I begin talking to and interviewing more the next Breakthrough Model. Every time I talked with her, Theresa took the time to respond with clarity, honestly and humility. Finally: she’s just all that!  Facts folks! So on behalf of all the previous awardees and in conclusion, the Green Living Guy fans and I say: Congratulations!!