This was a fun review. Besides the fact it was an all Electric car. For the Ford Focus electric was easy to change and use all day. Ford did make this an easy car to use, charge and drive. 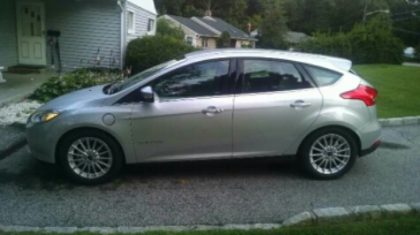 According to Ford reps, The Focus EV has more passenger room and a faster charging system that allows for a full recharge in nearly half the time of Nissan Leaf.

When tested the charging time is enough to get around for a longer period of time. While it wasn’t a fast charge (fully in 30 minutes) it increases your total miles by 20 miles per hour to 125 to 140 miles per day.

The first version of the Ford’s Focus Electric Vehicle just got EPA certification of 110 miles per gallon equivalent (MPGe). That’s city rating and 99 MPGe on the highway.

Furthermore, the Focus Electric Vehicle (EV) also got 105 MPGe combined. This is higher than the Nissan Leaf by 6 MPGe.

When I spoke with the Ford reps who dropped off the car, they noted a few things. First off, the Focus EV has more passenger room and a faster charging system. That’s very true. It allows for a full recharge in nearly half the time of Nissan Leaf.

The report comes via

“Ford is giving customers the power of choice for leading fuel economy regardless of what type of vehicle or powertrain technology they choose,” said Eric Kuehn, chief nameplate engineer, Focus Electric.

The Focus is a great EPA label. It also says customers could save $9,700 in fuel costs over the course of five years. However are more noteworthy, batteries in electric cars last longer then anyone rates them form.

Also, Batteries will last longer than 10 plus years so $18,000 in fuel savings to start. Then and then don’t forget oil, brakes and all other parts.Comparative savings could go even higher if the current trend of rising gas prices continues.

Also, faster charging with 240 volts also can extend range. That’s as drivers can more quickly recharge between stops. That’s up to 20 miles per charge hour. Therefore, they can significantly improve a car’s range during a busy day of driving by recharging multiple times.

All powered by Microsoft is designed to help owners in the U.S. charge their vehicles at the cheapest utility rates. That is so cool cause it can make charging the Focus Electric less costly than charging the Nissan Leaf. 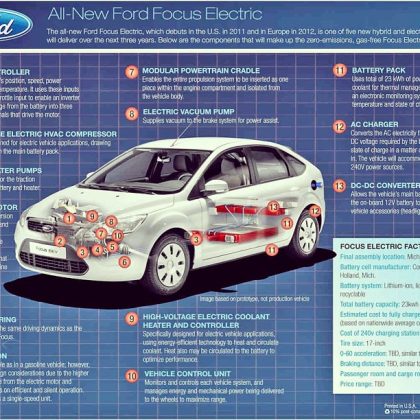 Ford also launched the first ever Focus Electric ad. It ties to a larger campaign Ford launched today, By Design. You know Built Ford Tough as Ford’s campaign for trucks. However,  this is the first dedicated campaign for Ford cars, and the first time Ford has played with the iconic Ford Script.

Focus Electric also is the first of its kind to feature faster charging, which will halve Nissan Leaf’s time to fully recharge the battery and help drivers to more than double the expected single-charge range in a busy day of driving and recharging.

“The Focus Electric is a shining example of the leading fuel economy Ford is offering for each new vehicle,” said Derrick Kuzak, group vice president, Global Product Development. “Whether people want a hybrid, plug-in hybrid or full battery-electric vehicle, we have a family of vehicles for them to consider, providing a range of options to best meet their needs and support their driving habits and lifestyles.

With 20 years of Ford research and innovation behind the software and hardware technology, the company offers proven engineering and design with Focus Electric. Ford holds approximately 500 patents on the hybrid technology used in the new Focus Electric and its other electrified vehicles.

Focus Electric is designed to offer enough range to cover the majority of daily driving habits of Americans. Its expected 100 MPGe is better than Chevrolet Volt and all electric vehicles with seating for five.

It is the first electrified vehicle to offer faster charging with 240-volt outlets, which can be installed in customer homes. The battery can be recharged in just more than three hours using a 240-volt charging station. That’s about half the charging time of the Nissan Leaf.

Faster charging with 240 volts also can extend range as drivers can more quickly recharge between stops – up to 30 miles per charge hour – so they can more than double the vehicle’s range with multiple charging stops during a busy day of driving.

A unique value charging feature, powered by Microsoft, will help owners in the U.S. charge their vehicles at the cheapest utility rates, lowering the cost of ownership.

Focus Electric will offer MyFord Touch and MyFord Mobile, designed to make charging and driving the vehicle even more efficient, affordable and easier to live with.

Production is moving from a supplier in Japan to the Van Dyke Transmission Plant in Sterling Heights, Mich., which also will assemble battery packs for Ford’s electric vehicles.

With the new electrified vehicles, Ford’s Michigan Assembly Plant is the first facility in the world capable of building a full array of vehicles – gas-powered, EcoBoost®. Also electric, hybrid and plug-in hybrid. Most noteworthy, all on the same production line.

The plant also features one of the largest solar power generation systems in the state as well as several electric vehicle charging stations, allowing the facility to operate on a blend of renewable and conventional electricity.

Also, renewable energy collected by the solar panels directly feeds the energy-efficient micro-grid. Thereby helping power the plant. When the plant is inactive, such as holidays, the stored solar energy will provide power during periods of insufficient or inconsistent sunlight. Projected energy cost savings are approximately $160,000 per year.

The plant also has 10 electric vehicle charging stations that recharge the electric switcher trucks that transport parts between adjacent facilities – saving an estimated 86,000 gallons of gas a year.

Plus, 50 percent of the parts arriving for the all-new Focus are packed in cardboard, are carefully collected, sorted and recycled, as is the bubble wrap, the Styrofoam and the water bottles used by employees.