In the United States, .005 percent of all energy consumed comes from solar. This may seem like an insignificant number, but it’s actually quite substantial. In addition, between 2014 and 2015 alone, there was a 33 percent increase in solar power generation across the globe! Currently, the total photovoltaic (PV) power generation capacity around the not just in China. However it is greatly across the United States and the world is solar power.

In the United States, .005 percent of all energy consumed comes from solar.

This may seem like an insignificant number. However, it’s actually quite substantial. In addition, between 2014 and 2015 alone, there was a 33 percent increase in solar power generation. That’s across the globe! Currently, the total photovoltaic (PV) power generation capacity around the world stands at well more than 231 gigawatts from 2017 numbers.

So that means for companies like Panasonic Solar the opportunity burns bright for solar technology!

When you integrate it with a smarter grid and energy storage; all bets are off!!

I wrote before that the American solar workforce grew at a historic pace in 2016; a year when one out of every fifty new U.S. jobs was in the solar industry.  This was according to the new National Solar Jobs Census 2016; the seventh annual report on solar employment issued by The Solar Foundation.

According to the report

1. Nine percent of solar workers nationwide are veterans, compared to 7 percent in the overall U.S. workforce.

3. the percentage of African-American solar workers increased from 5 percent to 7 percent

4. and the percentage of Latino/Hispanic solar workers increased from 11 percent to 17 percent.

Can We Say Solar Jobs?

For the National Solar Jobs Census 2016 found that solar industry employment growth outpaced the overall U.S. economy by 17 times; increasing by over 51,000 jobs, for a total of 260,077 U.S. solar workers!!

The solar workforce grew by 25 percent over 2015, the largest annual growth percentage since The Solar Foundation’s first National Solar Jobs Census was released in 2010.

The future is digital, connected and automated. But where will all the energy come from to run the myriad systems required to inform and enhance our lives

Renewable energy makes a future humming with electricity-consuming devices look not only possible, but practical for our planet.

Before most people even knew what renewable energy was, Panasonic had carved out a position at the forefront of solar power. Today, more than ever, Panasonic is creating solutions that allow their customers (businesses and government alike) scale down their energy costs. 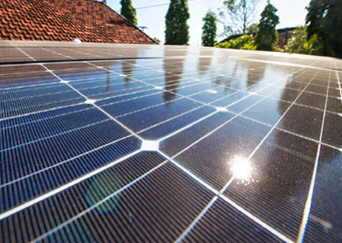 Panasonic Is the World’s most efficient solar

The world keeps asking more of solar, but finding even a 1% gain in performance is no easy task. Panasonic is wringing the full energy potential from every minute of sunlight.

Their HIT (Heterojunction with Intrinsic Thin-layer) solar panels have set an industry record year after year after year with their conversion efficiency (taking the electrons and making them into electricity), providing businesses with greater power output and savings. Also to make each panel smarter, they add to each installation an advanced solar tracking systems that deliver “more value from dawn to dusk”..

The advantages of Panasonic’s HIT panels

According to Panasonic, to create higher long-term value, Panasonic optimized every element of its innovative HIT panels. Ultra-thin amorphous dual silicon layers absorb and retain more sunlight, allowing for higher energy output. At the same time, an ingenious bifacial design captures light from both sides of the panel. And a unique interior structure reflects less light back out of the panel.

Reliable energy storage multiplies the value of renewable power, helping utilities and municipalities meet peak demand on hot days – and after the sun goes down. Battery storage also eases the challenge of maintaining the grid’s capacity after storms or equipment failure.

Panasonic is helping communities create clean energy today and for decades to come. A 34-megawatt plan in Tulare County, California, will serve 9,000 homes. Then you have a 120-megawatt project in Florida which will potentially reduce carbon dioxide emissions by more than 3.5 million tons over 25 years plus save the town money on Energy. Let’s not forget Denver! They teamed with Panasonic in a “holistic technology initiative” that is creating a model for all cities all across the globe concerned about sustainability.

One of Florida’s largest solar projects is powering up, thanks to the end-to-end solution provided by Coronal Energy, powered by Panasonic, a leading developer of large-scale solar PV solutions in North America. They are also installing 1.5 million solar panels, which enables Gulf Power to generate 120 MW of electricity; which is enough to power 18,000 homes.

Battery storage in combination with Solar is the one two combo pack that everyone is quickly gaining a respect for. That’s why the combo pack is really getting a foothold! As energy systems evolve to accommodate the two-way flow of renewable power, Panasonic helps utilities unlock multiple value streams from lithium-ion energy storage.

Their 11-site solar PV project for Macerich, a large shopping mall operator, spans multiple states, each with its own regulations. The comprehensive solution included:

All of this work is expected to reduce energy usage by up to 30% at the installed properties. Multi-stakeholder microgrids In Colorado, CityNOW – their North American smart city initiative – is pointing the way forward with an innovative public-private partnership.

Encompassing many assets, uses and stakeholders, our solar+storage microgrid is enabling utility Xcel Energy to test emerging technologies for broader deployment, while helping Denver and its international airport to pursue aggressive sustainability goals.

Where Will Panasonic Go From Here?

For it is growing rapidly in many segments and applications. All due to various reasons such as their environmental friendly attributes, minimum maintenance, and cost saving.

The major market players are investing heavily in PV technology. Furthermore, many governments are providing various incentives and funding to this market. Panasonic Solar was reported to be one of the top 5 leading companies for Solar. I mean that’s into the foreseeable future.

Remember the hashtag #PanasonicMovesUs and this post was sponsored by Panasonic USA.