An increasing number of school districts are testing and adopting electric buses.

For they are joining the movement. All to help promote safer, more reliable and cost-effective transportation for students.

While transitioning buses to electric can be a complex project. Yet school districts can be working with an electrification service provider. Those that will reduce upfront cost barriers. Also and help ensure schools can design and install an energy infrastructure. Those that supports future fleet scalability needs.

A primary advantage of electric school buses is lower total cost of ownership (TCO). The upfront cost of an electric bus is approximately $120,000 more than an internal combustion engine bus, but an electric school bus will save fleet operators an estimated $170,000 to $240,000 in lifetime fuel and maintenance costs.1

“The initial cost of the bus was three times more than a diesel bus. But the bus’s operational costs are only one-fourth that of our district’s diesel buses,” said Brad Redmond, West Fargo Public Schools’ transportation director.

Redmond added that the district’s existing diesel bus fleet spends an average of 42 cents per mile on fuel. Now that’s compared to 14 cents per mile in energy costs with the electric bus.

In addition, the district runs its electric school bus for an estimated 100 miles before charging. So for a few hours after each route you charge up. That which drivers say is easy to manage.

In Tacoma, Wash., the Franklin Pierce School District runs 51 bus routes each day within a 14-square-mile area. It received $330,000 in grant money to electrify one electric school bus from its mid-’90s model fleet and install a charging station.3

Franklin Pierce School District buses typically cover 12,000 to 15,000 miles per year. After one year of operation, the electric school bus produced $8,000 in fuel savings. That’s not even the maintenance savings from an electric school buses if they all became a fleet of buses.

“Learning to drive the bus was easy, but one of the biggest benefits has been how much better the students behave due to the reduction in the bus noise levels,” he added.

Buses leveraging electric power also have a positive impact on student cognitive functioning. Studies show that students perform better academically and have better overall health when exposed to fewer emissions than other children.5

Electric school buses have fewer moving parts than their diesel-powered counterparts (exactly how I wrote in Build Your Own Electric Vehicle, 2nd and 3rd edition. So that’s meaning they are less likely to need repairs or replacements over time. For school districts, electrification means their fleet will have more uptime. Yes folks than existing diesel buses to transport students more reliably.

Another benefit of electric buses is converting kinetic energy to battery charge via regenerative braking technology. So going downhill or across flat roadways it also creates better fuel efficiency and decreases the wear on brakes and tires.

So for example, diesel-powered vehicles, including:

Unlike diesel-powered buses, battery-powered buses can be fueled directly on the school campus or at the bus garage. That’s freeing up time for bus drivers. On-site charging infrastructure allows drivers to keep buses optimally fueled without returning to a central depot. Thereby increasing reliability and enabling longer-range route planning.

“We have saved money in fuel and employee hours since there are no runs to the fuel station. And our transportation department employees value that there is no emission buildup in the bus garage,” said Redmond.

Since school bus fleets have predictable schedules with long breaks in between use (both during the school day and during the summer), fleet owners have the opportunity to leverage vehicle-to-grid (V2G) technology. All that can also generate revenue. Buses not in use can charge when prices are low. So they participate in grid services for use during peak demand periods.

Managed charging software allows districts to plug in a bus, and have the bus only charge when, and if needed. The chargers can also be programmed to charge the school bus during the least expensive times of day. This new managed charging infrastructure helps to reduce standby power and decrease the total cost of energy. 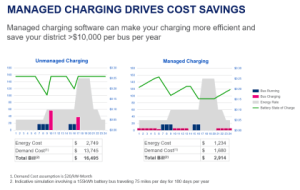 In addition to training just the staff that will be driving and maintaining your electric school bus fleet. Also additional expense will be brought about from: