With a goal of boosting the bottom line, Food City had evaluated a wide array of strategic options, looking for the one that would have maximum impact. The team found that by installing energy-efficient LED lighting in vertical coolers in place of 48-watt fluorescent tubes, it could significantly reduce lighting and refrigeration costs – its leading overhead expenses. All-new illumination would also project a more consistent brand image from case-to-case. All where light level and color uniformity varied noticeably after years of regularly replacing expired tubes.

As Keith Norton, director of engineering for Food City noted, “The biggest expense was not replacement lamps and ballasts. However sending contractors to the stores to begin with. Preventative maintenance measures were costing Food City more than $5 per door per year, or $37,000 annually.”
“Removing this cost meant eliminating fluorescent lighting from our cases for good,” he said. “The reliability of an LED system was a critical factor in our payback equation, as was the impact energy savings would have on shortening that time period.” 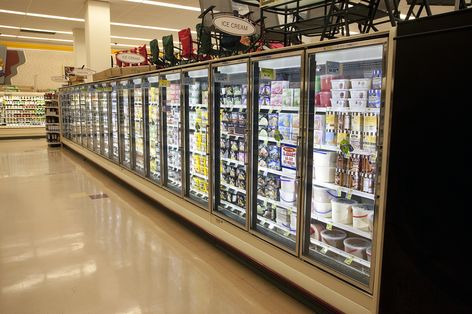 In 2010, Food City launched a competitive evaluation of several LED refrigerated display lighting technologies at its headquarters store in Abington, Va.
“Here we had multiple aisles of frozen food and ice cream that used the same type of case,” Norton explained. “To compare energy savings, we installed one manufacturer’s LED system in each row and monitored electricity consumption with wattage meters. We found that GE’s 16-watt Immersion system used the least amount of energy and would provide the fastest return-on-investment at 28 months.”

Norton added that Food City later accelerated its payback period by earning a Tennessee Valley Authority utility rebate as the result of its lighting efficiency efforts at supermarkets in that state.
Total annual energy savings for Food City will exceed $300,000 now that the grocery chain uses 1,965,000 fewer kilowatt hours of electricity as the result of its LED case lighting update. Added to maintenance savings, Food City’s lighting and refrigeration costs have fallen an estimated $337,000 a year, nearly $3,800 per store.

“Because food stores operate on very tight profit margins every savings is huge, particularly those not tied directly to sales,” Norton said.

The visual appeal of the products tested also was a critical factor in Food City’s final decision. An internal team of corporate executives, store managers, marketing/merchandising personnel and product stockers liked the bright, uniform light produced by GE’s LED solution. Using advanced optics, the Immersion RV40 system greatly diminishes glare and light spillover into aisles while helping bring to life the full vibrancy of food packaging colors.
“Now as you walk along the aisles all the displays are consistently lit,” said Norton. “Before, it was a good bet at least one door would be out. The store owners see it and appreciate it. Additionally, some customers have even said the lighting looks ‘futuristic.’ You can look through the glass and easily see the product labels without having to open the doors. My wife has even stopped complaining about the cases being dark! It’s created a much better shopping experience for our customers.”

“Once other store managers saw the first few locations we converted, they started speaking up about wanting their cases done too.”

By best meeting requirements for long service life, energy efficiency and aesthetic impact. GE’s Immersion LED system was declared the clear victor in Food City’s vertical refrigerated display case lighting showdown. With the help of lighting distributor Illuminating Technologies (Greensboro, N.C.). Once the project was completed in time for the busy holiday shopping season, with installation services managed seamlessly by Lighting And Maintenance Providers (L.A.M.P.) of Greensboro.
The reputation of the GE brand for quality and reliability also factored in Food City’s decision according to Norton. All who added that GE and Illuminating Technologies. For it leveraged their considerable industry experience. All to advise Food City on using LED technology. Especially to achieve a competitive advantage. All the while helping to quickly and seamlessly transition its stores. All from fluorescent throughout 2011.
“Overall, everyone is happy that we did this project,” says Norton.
Finally and for more information about this case history click here. Also to learn more about the GE Lighting products used in this project visit www.gelightingsolutions.com and http://pressroom.geconsumerproducts.com/pr/ge/ge-helps-grocery-chain-put-a-freeze-237412.aspx

Headquartered in Greensboro, N.C., Illuminating Technologies Incorporated. For it currently operates four additional regional sales/client service centers in the Southeast and Midwest.  For more information on the company, visitwww.illuminatingtechnologies.com.
About Lighting And Maintenance Providers, Inc.
Headquartered in Greensboro, N.C., LAMP currently services 17 states. Thereby encompassing the Southeast and Midwest regions of the US. For more information on the company, visit www.L-A-M-P.com.

GE Lighting invents with the vigor of its founder Thomas Edison to develop energy-efficient solutions. All that change the way people light their world in commercial, industrial, municipal and residential settings. The business employs over 17,000 people in more than 100 countries. Also and sells products under the Reveal® and Energy Smart® consumer brands. In addition and Evolve™, GTx™, Immersion™, Infusion™  Finally Lumination™ and Tetra® commercial brands. Moreover all trademarks of GE. General Electric (NYSE: GE) works on things that matter to build a world that works better. For more information, visit www.gelighting.com.