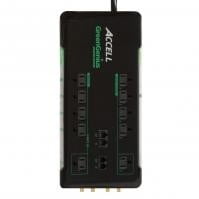 I’ve been doing an extensive test of Accell’s new GreenGenius smart surge protectors in my son’s room with electronics.

With the abundance and dependence we all have on technology these days, it’s no secret we’re using up a great deal of energy and power. Even when we’re not using our electronics, they’re still drawing power and are exposed to potential damage from a power surge! Fortunately, Accell just launched its new GreenGenius smart surge protectors, an ideal way to save valuable energy and money.

In addition, according to the US Department of Energy, studies show that 15% of the energy a household uses is for standby current. With its Power Stop technology, the GreenGenius automatically stops conducting power once the absorption has reached.

Summary of Savings
It gets confusing but about it’s about $10.00 per month. It without a doubt is a loss. Meaning the product worked. The question now is how much.

Based on my average electricity bill is $150.00 times 15 percent and given half of the consumption was coming from where this power cord was located it’s about $10.725. So $10.00 to be conservative. That’s a $250 plus savings a year from a power strip people!! It costs about $45.00 so you’re making money after about four months!

Typical surge protectors continue to supply power even after they no longer are providing surge protection, exposing connected devices to potential damage from a power surge. With its Power Stop technology, the GreenGenius automatically stops conducting power once the absorption has reached capacity.

Sourced from and thanks to Accell for allowing me to test this power surge strip. Saving green.