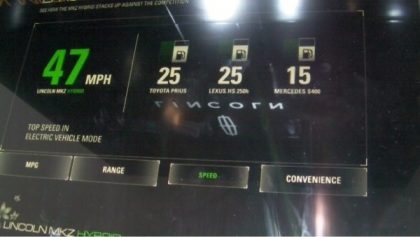 WASHINGTON, D.C. (June 26, 2012): Up to 570,000 American jobs will be created by 2030 as a direct result of the vehicle fuel economy standards proposed by the Obama administration, according to a new study released today by the BlueGreen Alliance. The report, Gearing Up: Smart Standards Create Good Jobs Building Cleaner Cars, said 50,000 new jobs in light-duty vehicle manufacturing and assembly alone will be created by 2030 as a result of the proposal to raise fuel economy on light-duty vehicles built between 2017- 2025, reaching 54.5 miles per gallon (mpg) and 163 grams of carbon dioxide per mile (g/mi).

The study said the standards also will save drivers money at the gas pump, open new markets abroad for U.S. automakers and increase wages for middle class workers even faster than jobs growth.

“Reducing fuel use and our reliance on oil is one of the greatest challenges we face today,” said BlueGreen Alliance Executive Director David Foster. “High fuel costs deplete Americans’ wallets and deplete natural resources. Doubling vehicle fuel economy is a leap forward that will alleviate our dependence on oil at the same time providing significant economic and environmental benefits.”

From the seasonally-adjusted low point of June 2009 through May 2012, the nation gained 146,000 jobs in motor vehicle manufacturing (including the parts suppliers) and when auto dealers are included the job gains amount to 219,000. The report supports the idea that by retooling, expanding and advancing vehicles and components to produce cleaner, more fuel-efficient cars that consumers are demanding, there’s potential to create even more jobs.

“Take all the posturing out of the equation and everybody knows that the only way to deal with high gas prices is to use less gas,” said Michael Brune, Executive Director of the Sierra Club. “With this new proposal, building on his strong 2016 standards, President Obama has taken the single biggest step of any U.S. President ever to slash our oil dependence, cut greenhouse gas pollution and get our economy back in gear.”

America spends $1 billion a day on foreign oil. The BlueGreen Alliance estimates show that by 2030, these proposed standards will save drivers of passenger cars and light trucks approximately $61 billion dollars per year on their gasoline bill, even after accounting for the slightly higher purchase price of more fuel-efficient vehicles. By the time the proposed standards have fully taken effect in 2025, they will save consumers an estimated $4,000 dollars over the life of a vehicle.

“The proposed fuel economy standards create jobs in two ways,” noted ACEEE Executive Director Steven Nadel. “First, jobs are created to design and produce more efficient cars, and the parts used in those cars. Second, consumers save money on their fuel bills, and respend those fuel savings in ways that help the economy to grow.”

“The drive to improve fuel economy is paying off for the automotive sector, for the economy and the environment,” said United Auto Workers (UAW) President Bob King. “These vehicles require more quality components – creating good jobs – and we are working to ensure they will be manufactured here domestically by union members. By making vehicles that use less fuel and are better for the environment, the U.S. auto industry will continue to thrive.”

The report also explores the impact of requiring more vehicle parts to be made in America, increasing domestic content. Findings show that if light-duty vehicle domestic content rose to 75 percent in 2030, then an additional 4,100 manufacturing jobs would be created, creating a ripple effect in other sectors creating an additional 9,000 more jobs.

Besides creating over half a million jobs, there will be a net increase of about $75 billion in annual Gross Domestic Product (GDP) by 2030.

Sources: To read the report visit: ACEEE, The BlueGreen Alliance,