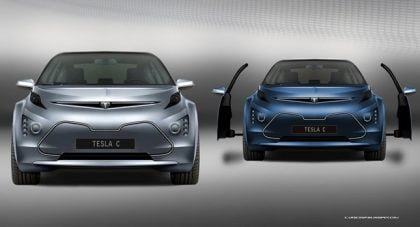 So this is actually an electric car study for a compact electric hatch! So great story on CarScoop but was given to me by RemyC at Electrifying Times about the Tesla Model C!

For the Tesla Model C concept is the way to expand their battery business. Thereby and reduce the cost of the electric car to the masses.

As written:
Understandably, in order to survive, Tesla will need to expand its range in other segments as well. So here’s where an old acquaintance of CarScoop comes into the picture.

Dejan Hristov is an independent designer whom we came to know from his study for a Bugatti Super Sedan. This time, Hristov is proposing a smaller Tesla vehicle. One that he has named the Model C.

The edgy-looking, three-door hatchback. For it employs some interesting design solutions. I mean such as the sliding passenger compartment doors. That’s as well as the rear bumpers that incorporate a retractable drawer.

It’s definitely a wild design for Tesla but I love the idea.  Anyway to shake up car design for me! So let’s go Tesla Model C!

“This is a modern, harmonic, unique design, with a sports image, for a city car equipped with an electric motor and lithium-ion battery. This car has a glass top, which covers the metal parts of the construction, offering a futuristic view on the design.

The side doors are big offering an effortless entry to the back seats. The doors are equipped with innovated mechanism for opening, ideal for conditions with restricted space (the mechanism is shown in one of the pictures). The opening and closing is automatic; actually, the mechanism of the doors would be maneuvered by electric motors.

For the entire story from CarScoop