NRDC released its report on the state of the game console industry, shedding light onto the energy consumption of one of the most popular electronic devices in American homes. This is an issue that EPA’s ENERGY STAR program has been involved in for the last several years, working with game console manufacturers and establishing voluntary efficiency standards. In fact, all three of the major game console manufacturers have integrated power management features that were called for in EPA’s efficiency standards. But, there is still much work to be done in order to make serious gains in energy efficiency. If you plan to write about this subject, ENERGY STAR’s game console experts are on hand to provide you the in-depth details you need about the current state of this issue and what the U.S. Environmental Protection Agency is doing to ensure more energy efficient game consoles in the future.

With over 100 million game consoles in homes across America, they are a big energy consumer. In the U.S. they consume an estimated 10-11 billion kWh per year—roughly equal to the annual electricity use of the City of Houston. EPA has been working with game console manufacturers to lower this energy consumption, establishing voluntary standards in 2013. But while there has been progress, the game console industry still has a long way to go. For example, while the new consoles PS4 and Xbox One offer a large leap in performance and make use of new approaches to efficiency, they consume 2 – 3 times more annual energy than their prior versions. 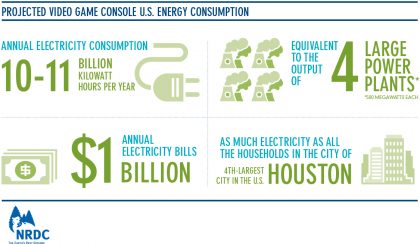 Opportunities for further improvement exist and most gamers do not realize how much energy their game consoles use. Recognizing the need to tamp down this energy use without tamping down the excitement of video game play, EPA has worked with game console makers and efficiency advocates to develop efficiency standards for game consoles.  The recently released versions of game consoles from all three major manufacturers now feature power management capability as called for in EPA’s voluntary standards, meaning they will go into a lower power sleep mode when not being used for game play or streaming videos and are enabling connected consoles already in consumers’ homes to power manage.   Going forward, EPA echos NRDC’s call to manufacturers to employ additional power savings tactics highlighted in their new report.

If all game consoles sold in the United States met EPA’s voluntary efficiency standard, the energy cost savings would grow to $1.6 billion each year and 22 billion pounds of annual greenhouse gas emissions would be prevented, equivalent to the emissions from more than 2.1 million vehicles.