New Orleans, La. – Citing evidence that a vast majority of citizens call coastal erosion the issue of a lifetime, the America’s WETLAND Foundation (AWF) today called on the State of Louisiana to rescind any actions that would halt momentum for coastal restoration along its fast deteriorating coast.

“In such dire budget situations, across the board cuts may be politically plausible, but the case we make for saving our coast has been one of utmost urgency. We cannot afford to send a contradictory signal to those who are deciding on billions of dollars in restoration funding and attention to our most critical needs,” Val f, managing director of the AWF, said.

The survey cited by the Foundation is from a recent poll of Louisiana voters in which 74% representing both political parties say, “saving Louisiana’s coast is the most important issue of my lifetime.” The poll also found overwhelming concern that coastal land loss is directly tied to a strong economy and protection of communities. 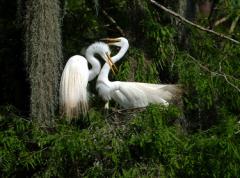 “For more than decade we have sent the message to Washington that the state will stand firm in doing its part to restore the coast, the loss of which both impacts our citizens in very real ways and has negative consequences for the U.S. economy, its energy and navigation sectors and one of the most important estuaries on the planet,” Sidney Coffee, senior advisor to AWF and former chair of the Louisiana Coastal Protection and Restoration Authority, said. “Now to send any contrary message to our partners at the federal level and national supporters in the non-profit sector could serve to chill the strong support we have gained to fund and restore the coast.”

News about plans to cut funding were just announced by the Jindal Administration, stating coastal funding could be cut by more than $6 million dollars.

“Every day we lose a football field of land to coastal erosion as we continue to suffer the greatest land loss on the planet”, Marmillion said. Many worthy, necessary programs and projects will fall in the budget cutting process. However, we call upon the legislature, the Administration, and thoughtful citizens everywhere to avoid doing anything that will slow the wheels of restoration progress. No single issue more negatively impacts the future economy of our state than coastal land loss and our failure to reverse it.”