charging station features four clear-cover enclosures for users to store and charge mobile devices such as phones and tablets.

Two of the enclosures are also sized for standard-size phones.  and two are larger to accommodate small tablets and larger smartphones.

In addition, a photovoltaic panel atop the station charges a sealed 12-volt battery. The battery also powers the four-slot 48-watt USB power hub.  One that can supply up to 2.4 amps of charging capacity per slot.

The stations do not provide alternating current (AC). Laptops and other devices also are using AC power cannot be charged using these stations. 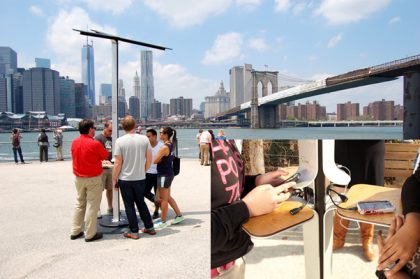 City of St. Petersburg employees were responsible for manufacturing. Each station costs approximately $2.500. For that’s including fabrication and installation. Locations where charging stations will be installed include:

and two locations in Vinoy Park.

In conclusion, sustainability continues to be a cornerstone of Mayor Kriseman’s Administration.  Moreover an important component of Deputy Mayor Kanika Tomalin’s Healthy City Initiative. On April 18, the City of St. Petersburg celebrated Earth Day.  For it was its second annual free festival.  Located also in South Straub Park along the cities renowned waterfront. This was also the second official Earth Day festival for St. Pete.

It is the city is leading the way in Florida.

All by implementing strategies for most noteworthy a sustainable future.

In additionSt. Petersburg was also the first city in the state.  All to receive the Green Building Coalition’s Green City designation.  Moreover it has been recognized for:

and preservation of open spaces.