At the Boulder International Film Festival 2015 audiences voted an animal rights film and a conservation film as the best two feature films of the festival with ‘Lion Ark’ winning the People’s Choice Award for best feature film, just ahead of ‘Racing Extinction’, the new film by Louie Psihoyos, director of Oscar winner ‘The Cove’ which in turn won the festival’s Catalyst Award.

The prestigious festival was attended by over 25,000 people. Moreover and a special honor was presented to Hollywood legend Alan Arkin.

Over 50 diverse films were screened.

However, it was the two campaigning films for animals and the environment that won the hearts of the audiences.

While Lion Ark and Racing Extinction are radically different in narrative style, both have in common that they take animal, environment and conservation issues head on, showing people how they can make a difference, by protecting animals and conserving the planet for all. 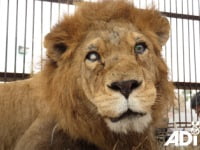 Lion Ark is a live action documentary about the rescue of 25 lions from Bolivian circuses by a team from ADI, follows their remarkable rehabilitation and journey to a sanctuary in Colorado.

Tim Phillips, Director of Lion Ark:  “Lion Ark is up close and personal, in the heart of the action; we wanted people to enjoy the story while it delivers an important message, so it is very rewarding that of the eight awards the film has won at festivals, five have been audience votes.

“Lion Ark and Racing Extinction are very different in style, but the audience response to both shows that there is real interest in films tackling animal protection, environment and conservation issues, showing people they can make a difference and doing so in a positive way.”

Racing Extinction is from the Oceanic Preservation Society and takes on two threats to endangered wild species across the globe: the international wildlife trade and the hidden world of carbon emissions and acidified oceans.

Lion Ark filmmakers Tim Phillips, ADI Vice President and Jan Creamer, ADI President, left the film festival to head straight for their next rescue operation, this time in Peru and Colombia, where over 60 animals are being saved from traveling circuses and the illegal wildlife trade.

Over 30 lions from this rescue will be flown by ADI to The Wild Animal Sanctuary (TWAS) in Colorado.

I mean just like the lions featured in Lion Ark. New habitats are being built by ADI in the Amazon to home the native wild animals including several species of monkeys, kinkajous, coatis and others.

Jan Creamer, “As we go back to continue this huge rescue in Peru and Colombia, it is very heartening to know that public interest in protecting animals and the environment has been so high at Boulder International film Festival.”

“Compelling cinema verité” – The Hollywood Reporter
“The feel-good movie of the year!” – Reel Talk
“Refreshing” The New York Times
“Unmissable! FIVE STARS” – Britflicks
“A consciousness-raising milestone of a documentary” – The Ecologist
“Up-tempo action-adventure of the most thrilling variety: real-life.” –  Stark Insider
“…thoroughly rewarding” – TV and Film Review
“One of your must-see films” – The Independent Critic
“Will restore some faith in humanity.” – Shockya.com
“… heartwarming, beautiful and inspirational.   It reminds you of the majestic power of documentary filmmaking…” –Shock Cinema Magazine / Mondo Film & Video Guide
“AMAZING! Viewers will be crying tears of joy throughout….” – Renee Snyder, International Animal Welfare Examiner, The Examiner