Two small wind turbines operate on the second floor of the Eiffel Tower. They generate 10,000 kilowatt-hours of electricity annually. Consequently only enough power for the tower’s commercial operations. 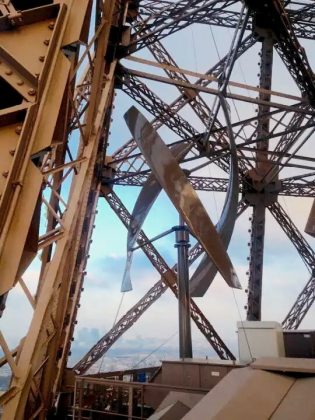 All for Sustainability with GE

The sustainability initiative is a partnership between the City of Paris and a company called Urban Green Energy (UGE). GE teamed up with UGE in 2012 to originally connect one of their small wind turbines to the GE WattStation. The WattStation is an electric vehicle charging station. Calling the integrated system the Sanya Skypump. Furthermore, electric vehicles use it to top off their batteries. Then they are powered as a result by the wind. That’s pretty cool.

Although and as The Verge reports, the turbines are 17-foot structures. When they started running the direction changed.

Drop in the Bucket

So Jan Gromadzki is the engineer who ran the project. You know folks, from the company that won. The New York-based Urban Green Energy (UGE). Jan says consequently that’s enough to power an average American family’s home for one year. But although for the Eiffel Tower which consumes an estimated 6.7 GWh a year: “it’s just a small drop in the ocean.”

In conclusion, when the turbines are moving, they’re clearly visible from the Trocadéro square. A location which offers a direct view of the tower from the opposite side of the Seine. But from the foot of the tower looking up, they’re barely visible. I mean lost amid the lattice maze of iron that holds everything together. Up close, they look sloped, smooth, and far more elegant. Meaning more elegant than the utilitarian propellers usually associated with wind power installations.

Most interestingly, this was in partnership with the Société d’Exploitation de la Tour Eiffel (SETE).

UGE designed the wind energy system to provide a clean source of energy at the Eiffel Tower. The two, UGE VisionAIR5 wind turbines were specially painted and matching the iconic tower. Plus a top off series of other efficiency upgrades.

The Eiffel Tower’s vertical axis wind turbines are virtually silent. Furthermore they are designed to capture wind from any direction. This consequently offers a unique addition to the historic structure.

All at the height of the installation and offsetting the Tower’s energy usage. So mounting the turbines at this location was itself a technical challenge. That’s because it’s requiring each component to be hoisted. As well as suspended with ropes to the Tower’s second level.

The Eiffel Tower attracts an estimated 7 million tourists per year. The 125-year-old tower was also is in the middle of a two-year, €30 million ($33.6 million) renovation that adds energy-saving LED lights. The renovation also introduced a vertigo-inducing glass floor on the tower’s first level.

Because Paris embraced greener policies. They are leaders at global summits on climate change but their temperatures in Paris are breaking records.

However, the city calling for all municipal buildings and public lighting to go green. Yes folks, exclusively using electricity from renewable sources. It was done by the year 2016 and Mayor Anne Hidalgo also banning all diesel vehicles from Paris by 2020. Hopefully in the hopes of easing its smog problems.

Their air is comparable to Beijing. So French authorities have taken steps to mitigate the problem, which the European Environmental Agency (EEA) described as the worst pollution spell since 2007. The head of Paris’ transit authority announcing free weekend public transportation, as part of this effort reducing pollution caused by cars. Furthermore, the city earlier announced that its public bike and car sharing services will also be free. Especially while pollution levels remain high. Even though environmental groups have urged the government to do more.

In addition to wind energy, the renovation included LED lighting. Plus a 10m² of roof-mounted solar panels on a visitor pavilion. Again this output meets 50% of the water heating needs.

Besides the Eiffel Tower, UGE designing wind, solar and microgrid systems globally. I mean they are located in more than 90 countries around the world. All for global brands like Whole Foods, Hilton, Dropbox and Verizon.

The hope is that planting discrete wind turbines on the city’s most recognizable building will not only reaffirm Paris’ eco-friendly agenda. However it will spur others to adopt similar technologies.

This is one of the companies dedicated to making sustainable living accessible to everyone.