The number of cars on our planet is growing every year: About 1.446 billion vehicles will be on Earth in 2021. Because of this, fuel consumption and, consequently, oil production is increasing. By burning fuel in internal combustion engines, we poison ourselves with toxic substances and change the climate. Green zones are rolled into the asphalt under new roads and parking lots to accommodate even more cars in our cities, but this cannot fundamentally solve the problem. Bikes, however, are one solution.

You can find a calculator on the Internet and use it to determine how many harmful substances are emitted into the atmosphere by different types of transport. It shows carbon dioxide emissions, which affects climate change, and nitrogen dioxide, a dangerous substance to health. 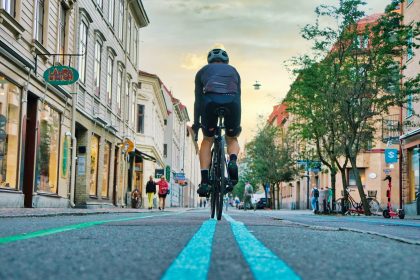 One of the main ways to tackle the problem of air pollution on the planet is to have fewer cars on the streets. But it would be best if you still drove something around the city. The most sustainable alternative to personal vehicles is bicycles. Undoubtedly, big cities like Tokyo, Delhi, or Shanghai cannot completely switch to bicycles. At least different cities are organizing bike parades more and more often.

If at least a couple of tens of thousands of people ride a bike to work every day and replace an hour behind the wheel of a car, thanks to each of them, about 1 kilogram of carbon dioxide will not be in the atmosphere. Together, these people will reduce emissions by more than 300 tons per day. If you absolutely can’t afford to give up your car, then you should consider a motorized bike.

Its advantage in increasing the speed by three to four times with a slight increase in mass is that it is very economical, compared to a sufficiently high speed in urban traffic conditions. This point led to the immense popularity of the bicycle with a motor in third-world countries and Asia in general, as well as in large metropolitan areas with difficulty in urban traffic.

So, for example, in Shanghai in 1996, there were 370 thousand motorbikes and 470 thousand other motorized vehicles. In addition, a motorized bike is an opportunity to use it on serious, “long-distance” trips. On a motorbike, a journey of a quarter of a thousand kilometers can be fully completed in a day and is accessible to everyone, and this is a severe trump card for cyclists.

The Advantages of Bicycles

Bicycles have many advantages: they are quiet and take up less space than cars on roads and parking lots, which means cities can have more public spaces for people. Bicycles protect people’s lives and health: they help make road traffic safer and become a valuable physical activity.

At short distances of 4-5 km, it is also the fastest vehicle, and on long journeys, bicycles are perfectly combined with public transport, which is much less harmful to the environment than private cars. You can also ride a bike all year round, even in winter! This does not require a separate bike or winter tires, and no unique clothing is required. Riding in winter is not cold, and after the trip, there will be no unpleasant smell of sweat.

The Greenpeace report notes that for the bicycle to become a full-fledged mode of transport, it lacks cycling infrastructure everywhere. At the same time, the organization recognizes that significant progress has already been made in developing bicycle transport networks. Additionally,  the cost of their construction is relatively low. The convenience, safety, length, accessibility, and connectedness of cycling routes cause satisfaction in almost all major cities.

Already in many countries, professionals are developing guidelines for the construction of bike paths. Such measures will reduce the number of short-distance car trips and help relieve road congestion. In particular, many are proposing to reduce the speed along routes near cycle paths to 40 km / h. We can expect cycling infrastructure to increase the convenience of movement over distances of up to 10-15 km.

Both residents and authorities want to make cities cycling. People are advocating for that change to occur as soon as possible. They want authorities to move from words to deeds. Along with other measures, this will help us live in a livable city and breathe clean air.